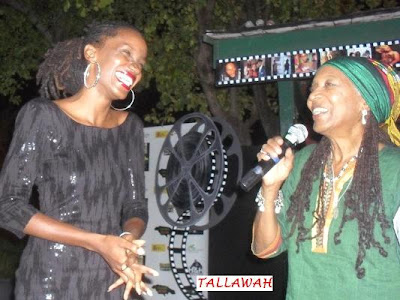 REEL TALK: Blake-Hannah (right), with Antiguan filmmaker Tameka Jarvis-George in 2011.
In addition to showcasing new works from local and international filmmakers, the 2012 Reggae Film Festival, slated for April 17-21 in Kingston, will be offering attendees a slice of nostalgia.According to the Jamaica Film Academy and chief festival organizer Barbara Blake-Hannah, a special Jamaica 50 aspect of the festival’s programme will feature retrospective screenings of classic Jamaican films like the beloved The Harder They Come, which marked the start of an indigenous feature film industry; the award-winning documentary Life + Debt that deals with the politically turbulent 1970s; and short films by cinematographer Chris Browne from his pre-Ghetta Life period.Also in 2012, the RFF will introduce an international programme of films outside the reggae genre, in a bid to enable the programme to include entries already received from Africa, the USA and the Middle East. There is even an entry from Iran. 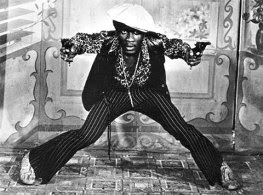 “In five years the Reggae Film Festival has showcased more than 200 films highlighting reggae culture made by Jamaicans, global reggae researchers and fans from the Caribbean, UK, USA, Canada, Europe, Japan, and Africa,” observes Blake-Hannah. “The focus of many documentaries on the history of Jamaican music and music makers has given the Jamaica Film Academy an archive of historical material on the genre that preserves on film the oral memories of a culture that that emerged from the Rastafari movement and spread to and been honored by the world.”As a precursor to the big event in April, the Jamaica Film Academy will host a special “Best of the Reggae Film Festival 2011” on Feb. 18 at the Red Bones Blues Café in St. Andrew.