AHEAD OF THE PACK: Popcaan storms the modern dancehall 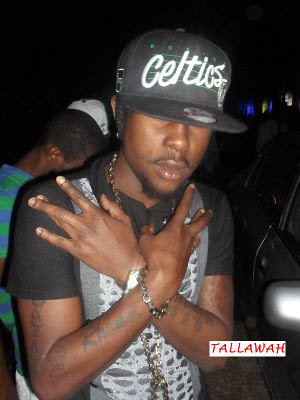 UP RISING: "The hard work is paying off," says the rising star.
The first thing that strikes you about ascendant dancehall disciple Popcaan is his easygoing style crossed with a sense of detachment. And it comes as a bit of a surprise. Titles like ‘hottest newcomer in contemporary dancehall music’ would inspire real arrogance in many of his peers, but Popcaan remains grounded while seemingly taking his newfound success in stride. “It’s a good feeling because I put in the hard work, and the success tek time ah come through,” he says of his burgeoning career, speaking with TALLAWAH at Jamaica House at the recent Shaggy & Friends charity concert. “So we give God thanks for everything.” The artiste (né Andrae Sutherland) does have much to be grateful for. In an industry often criticized for its dearth of bonafide shining opportunities for neophytes, Popcaan earned household-name status within a very short span and, perhaps even more noteworthy, in the pantheon of local entertainers who matter, he's being hailed among the standouts of 2011.

As if intent on maintaining his impressive career arc in the New Year, the 23-year-old singjay (known for club hits like "Ravin") is now up for a slew of awards this season, including multiple noms for next month’s Youth View Awards (YVAs) and The Star’s People’s Choice Awards. As far as Popcaan sees it, the recognition has come as a result of the tireless drive he brings to the music. “It’s because of the hard work. The awards [are] just to make sure that my thing stay uplifted,” he observes. “The music ah go keep coming, so I’m gonna get even more awards. You done know that at the end of the day hard work makes it all possible. So it is what it is.”

Email ThisBlogThis!Share to TwitterShare to FacebookShare to Pinterest
Labels: Best of 2011, Dancehall Stars, Ones To Watch, TALLAWAH Exclusive