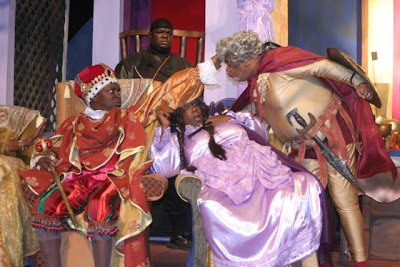 THE ROYAL WE: Campbell, Duncan and Johnson share a scene.
Breadfruit Kingdom (Jambiz Prods.)Directors: Patrick Brown and Trevor NairneCast: Glen Campbell, Camille Davis, Teisha Duncan, Volier Johnson and Courtney WilsonVenue: Centrestage, New Kingston‘Tis the season to be cynical about all things political while mining whatever entertainment can be had. Republicans Romney and Gingrich continue to duke it out on the American campaign trail. The recent General Elections have put a Portia Simpson-Miller-led government back in Jamaica House. Delcita and Shebada are currently hamming it up under the lights at the Stages Theatreplex as rivals seeking office in The Politicians. Now comes the long-awaited revival of Patrick Brown’s Breadfruit Kingdom, a jubilant and riotous satirical comedy that combines politics and poppyshow for a laugh-out-loud theatrical experience.The audience is transported to the realm of Breadfruit Kingdom, where the despicable King Street (Glen Campbell) rules with an iron fist, a light tongue, and an air of autocratic entitlement. Naturally, he is despised by the citizenry who’ve had to endure unimaginable taxation for years. Finally deciding they’ve had enough of the king’s tyranny, a rabble-rousing group set a plan in motion too overthrow him. Meanwhile, inside the palace walls, the king has his hands full dealing with his coitally uncooperative companion Queen Street (Camille Davis) and “gravalicious” daughter Princess Street (Teisha Duncan), who has ballooned in size on account of her serious food addiction. When King Street announces that he’ll give her hand in marriage to any wealthy suitor, the gyrating Rasta Baggalocks (Courtney Wilson, pitch-perfect) and the sword-and-shield-happy Prince Muchabelly (a splendid Volier Johnson) eagerly answer the call. And you know the big laughs fire off in rapid succession. Like any good satire, Breadfruit Kingdom juggles a lot at once, and though a couple of the balls do drop, the savvy duo of Brown and Trevor Nairne keep the story aloft with their directorial brio. The regal costumes are wonderfully appropriate and appear to glisten under the varied lighting. The actors meanwhile are having a blast, but particularly Campbell and Johnson (coincidentally members of the original cast) who bring sly comic timing to their parts. Davis and Duncan are appealing too but truly come alive when they switch into the roles of protesters.Although this new revival doesn’t hold a candle to the award-winning 1999 original, it certainly is a clever updating of a stage classic that comes at audiences with an insistent arsenal of shenanigans, catchy musical numbers, and a cheeky determination to skewer the Jamaican socio-political status quo. Tyrone’s Verdict: B