RISING POWER: Delcita and Shebada strike while it’s hot in The Politicians 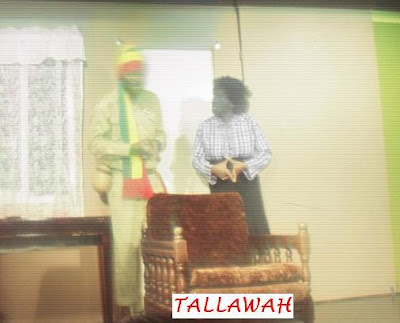 DREAM TEAM: Williams and Wright share a scene in The Politicians.

The committed actors of the new production The Politicians remain appealing, even as the show struggles to say all it has to before the stopwatch cruises past the three-hour mark. Still, buoyed by the convincing talents of the cast, it’s a hammy, frequently amusing production done in the broad comedic style of previous efforts by Stages.

The comedy, penned by Paul Beale, tells the story of four political hopefuls who find themselves in a tight, mud-slinging race to become the next representative of Half Pen. Three of them are neophytes feverishly bent on unseating the despised incumbent Monica Brown (played by Stacey-Ann Brissett), and each comes to the race primarily out of frustration with the system: Delcita, the President of the Citizens’ Association; I-Man-I (a superb Junior Williams), the dreadlocked campaigner steeped in Rastanomics; and the mischievous Shebada, who musters up the courage to wade into the treacherous waters after some goading by his pastor father (Michael Nicholson).

If you are of the view that the pairing of Delcita and Shebada on the same stage can only result in a relentless cascade of laughter from the audience you would be absolutely right. It’s a combustible mix. When he is not taking intermittent jabs at an overweight female heckler in the front row, Shebada (Keith Ramsey), as expected, clearly relishes his role and provides a neat foil for Andrea ‘Delcita’ Wright, who gives a pitch-perfect performance with her neat bag of tricks. The play is at its most delightful whenever Delcita seizes the spotlight.

I was also particularly impressed by Chris Daley as Gary, a shady politician who will stoop to new lows to get his way. Abigail Grant also has some scene-stealing moments as Sadie, a determined journalist who later assumes the role of Delcita’s campaign manager. A sub-plot involving Gary and Sadie’s volatile relationship adds some dramatic spice to the story.

My one problem with the play is that it could run about 20 minutes shorter. Otherwise, The Politicians is nicely directed for the most part by Bunny Allen (who did a commendable job with last year’s Double Dose) and has great talking points (ambition, blackmail, non-stop humour) to sell to an audience. It’s clever, funny and makes a solid point. The audience gets more than its money’s worth – and the central themes of politics and corruption could hardly be timelier. Tyrone’s Verdict: B+

Posted by TALLAWAH Magazine (tallawahmagazine@gmail.com) at 11:06 am