SILENCE IS GOLDEN: The Artist is worthy of the hype 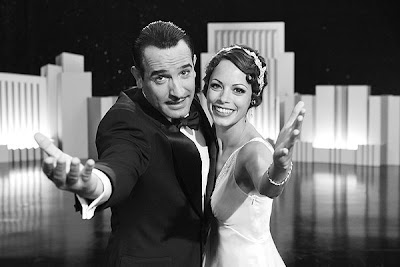 VINTAGE APPEAL: Dujardin and Bejo star in The Artist.
Every so often, a movie is the subject of incredibly high-minded buzz, garnering praise from critics and audiences alike that buoys it up all the way to Oscar night. A couple years back, such was the case with The Hurt Locker. This year, The Artist is the film stealing the spotlight as the best reviewed flick of 2011 – and deservedly so. A crowd-pleasing tribute to the magic of silent cinema, the film is an exhilarating thrill and a slice of nostalgia a charm that transports viewers back to a glamorous era in Hollywood’s past when silent pics were all the rage until talkies came about and revolutionized the world of showbiz.Written and directed by first-timer Michel Hazavanicius, The Artist is set in 1920s Hollywood, when George Valentin (played the irresistibly charismatic Jean Dujardin) is a silent movie superstar. A prideful fellow, Valentin falls into oblivion when the advent of talkies sounds the death knell for his career. Meanwhile, pretty young thing Peppy Miller (Bérénice Bejo), is busy working her way up the talent hierarchy from extra to genuine leading lady. At the core of the story is how their interlinked destinies come to shape their future.Ideally cast, Dujardin and Bejo are a perfect on-screen match. While Bejo’s sparkly effervescence serves her remarkably well, Dujardin wins over viewers with his priceless smile and appealing if low-key masculinity. And the film owes much, too, to Valentin’s canine companion whose performance is a total delight. John Goodman (as a dense film producer) and James Cromwell (as Valentin’s loyal chauffeur Clifton) round out the main cast.The great central performances aside, the film’s score by Ludovic Bource is a genuine highlight that plays a pivotal role in giving the movie its compelling emotional core. As it stands, The Artist (the recipient of 10 nominations for the Feb. 26 Academy Awards) is a clever, joyous film with delightful performances and visual style to spare.