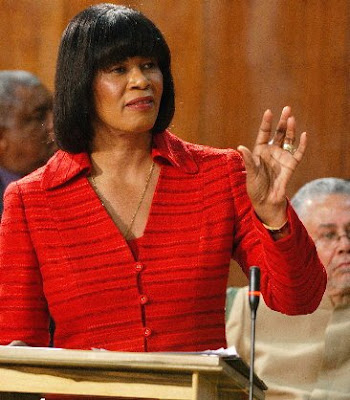 THE (NEW) IRON LADY: Simpson-Miller addresses Parliament.
Prime Minister Portia Simpson-Miller has advised the newly installed Members of Parliament to place the people of Jamaica at the heart of their deliberations and decision-making in the House of Representatives.Simpson-Miller, who was addressing Gordon House during Tuesday's swearing-in ceremony for the 63 MPs elected in last month's General Elections, reminded the elected reps that they are servants of the people and should not betray the national collective trust.

“We should count it a great honour to have been chosen by the people of Jamaica to occupy this important place in the affairs of our nation," said Simpson-Miller. "The people of this nation have reposed their trust and confidence in us, and we will work assiduously in these very challenging economic times to live up to that trust and protect the rights and interests of the Jamaican people."

Simpson-Miller said that as Jamaica celebrates its Jubilee anniversary this year, the task placed in the country’s leaders is made that more urgent. “We will uphold the laws of the land and conduct ourselves, and the people’s business, with sensitivity and sincerity. We will make participation, accountability and responsibility the watchwords of this new Parliament."The Prime Minister also called for unity and respect between Government and Opposition members, and committed to putting mechanisms in place to provide for meaningful inclusion of and consultation with civil society and non-governmental organisations.Meanwhile, Simpson-Miller welcomed the House's 20 new MPs, expressing that she is looking forward to their vigorous contribution to the discourse, discussions and debates in Parliament.