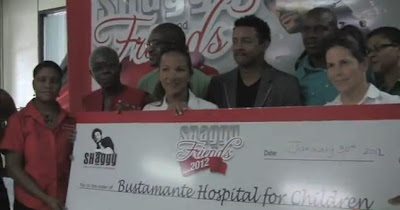 WORTHY CAUSE: A financial boost for the Bustamante Hospital.
The star-studded Shaggy & Friends charity concert staged on the lawns of Jamaica House earlier in January has raised some J$32 Million for the Bustamante Children’s Hospital. Shaggy made the announcement at a press conference at the hospital on Monday afternoon.The proceeds will go towards the furnishing of a new ICU/cardiac ward, in tandem with Chain of Hope Jamaica, a group of volunteer doctors and nurses who perform surgeries each year on Jamaican children with heart problems. Over 500 children are born each year with heart defects.For his part, Shaggy said he was “heartened by the outpouring of support this year by so many Jamaicans and pledges to continue to support this cause and encourages Jamaicans to do so as well.”To date, the Shaggy Make A Difference Foundation has raised a total of J$90 Million for the hospital, covering the costs for an overall audit to be done on all medical equipment (working or otherwise) at the Bustamante Hospital (June - July, 2011). In addition, the foundation donated two new, fully equipped dental chairs for the hospital’s dental. The new chairs were delivered and installed, along with 378 pieces of medical equipment, earlier this year.The 2012 Shaggy & Friends concert saw performances from the likes of Stephen Marley, Maxi Priest, Wayne Marshall, and Ms. Lauryn Hill.