THESPIES 2012: Where Is My Father, Charlie’s Angels lead nominees 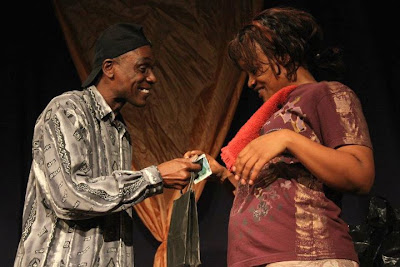 STAGE HIT: George Howard and Nadean Rawlins in Where Is My Father.
TALLAWAH Magazine has announced the nominees for the 2nd Annual Thespian Spirit Awards (the Thespies). This year’s most nominated productions? Patrick Brown’s explosive revenge saga Charlie’s Angels and Basil Dawkins’ intense domestic potboiler Where Is My Father.Both plays lead the pack with 6 nods apiece, including bids for the coveted Outstanding Acting Ensemble award. They are followed by Dahlia Harris’ rollercoaster comedy-drama Back A Yaad with 4 and the period musical drama Last Call, which also scored four nominations. Basil Dawkins’ other awards season bait A Gift for Mom earned four nods as well.“I’m very pleased. I can’t say I am altogether surprised because they are both good shows,” Dawkins (also up for a writing award) tells TALLAWAH in a phone interview. “The casting was very good, and we are working with so many young talents so it was good to see them being recognized.”The full batch of nominees for the top award of Outstanding Acting Ensemble: A Gift For Mom, Back A Yaad, Charlie’s Angels, Last Call, Not About Eve and Where Is My Father. “I appreciate that,” says Last Call writer-codirector Keiran King of the play’s multiple nominations. “Last Call was a very personal project. A lot of work went into it, and not just from me, but the entire cast and crew. So I’m very happy for them.” For her part, Harris tells TALLAWAH via email that she is “thankful for the noms.”Winners will be announced and statuettes presented on Feb. 20.

As a precursor to the Actor Boy Awards, the Thespian Spirit Awards aims to annually salute the most outstanding offerings in Jamaican theatre. Last year's big winners included the University Players' production of Appropriate Behaviour and the controversial Annie Palmer musical White Witch.

>>FULL NOMINEES LIST: See who is nominated for the 2012 Thespies 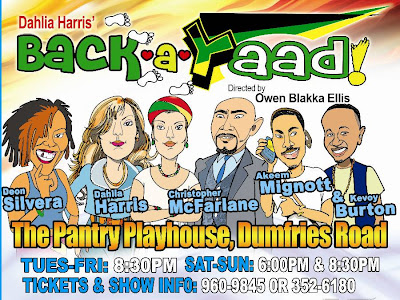 Posted by TALLAWAH Magazine (tallawahmagazine@gmail.com) at 12:51 am