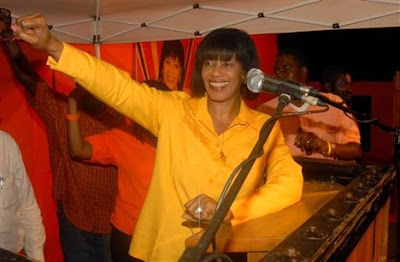 For the second time in a decade, Portia Simpson-Miller is about to assume office as Prime Minister of Jamaica. But this go-round is by far the more significant, as the PNP leader’s ascent to the post of head of government comes as the country is commencing a year-long observation of its Golden Jubilee. Could the timing be any more perfect?

As Opposition Leader, Simpson-Miller fully demonstrated guts and determination to prove to all that she is the woman for the job. And at the December 29 polls, voters responded by putting their faith in a Simpson-Miller-led administration to lead us into the next 50 years. Undoubtedly, Sista P’s grassroots approach to leadership and her people-oriented, citizen-friendly style has made her a hit with the masses and yet she is continuously ridiculed by some.

As such, for many it was a foregone conclusion that Andrew Holness and the JLP had the Election in the bag. What a shocking turn of events when the ballots were counted and the PNP decisively thrashed the JLP, netball style, 42-21.

So the lesson here, dear reader – possibly the biggest of the year – is that one should expect the unexpected when it comes to Portia Simpson-Miller, a political darkhorse-turned-main attraction poised to truly shake up Jamaican politics in 2012 and with a woman’s touch, no less.

Perhaps her greatest challenge now is to distill a new and hopeful order out of the several depressing forces (crime, corruption, poverty, unemployment) that threaten to further darken our horizon. More important, it is my fervent wish that Simpson-Miller will create history in another regard by becoming the first Jamaican Prime Minister to considerably diminish the gap between promises and performance.

It is a truth universally accepted that with such great level of power and authority and the determination to make one’s mark come ridiculous pressure. But Sista P, now 66, is too much a student of Jamaican history not to know that this new beginning of sorts is but the first scene of a lengthy odyssey. In the meantime, it isn’t asking too much of her admirers and detractors to acknowledge the scope and vigour of her work as a Jamaican woman of power and applaud the courage and sincerity with which it is being carried out.

[“It is my fervent wish that Simpson-Miller will create history in another regard by becoming the first Jamaican Prime Minister to considerably diminish the gap between promises and performance.”]