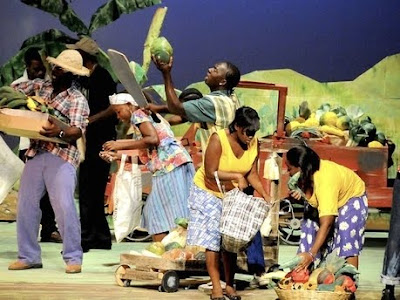 REAP & SOW: Harvest time in Jamma-Land in the latest LTM Pantomime.
Anansi and Goat Head Soup (LTM Productions)Director: Bobby ClarkeCast: The Pantomime CompanyVenue: Little Theatre, KingstonAs it turns out, the theatre is fertile ground for storytelling with talking animals at the centre. And as Jamaican folklore would have you believe, there is no creature craftier – or more talkative – than the ginnal Anansi, whose appearance always give rise to problems. In the new LTM Pantomime, Anansi and Goat Head Soup, while there is no shortage of mischief on the part of you-know-who, he is in for serious competition from a trio of garrulous, fidgety ‘animulls.’Capably directed by Bobby Clarke, with book and lyrics by Barbara Gloudon, this latest outing by the Pantomime Company is decidedly more delightful that anything the LTM has produced in recent years. Gloudon’s perceptive writing and the show’s appropriate pacing lend the whole thing a tight flow and genuine appeal. What’s more, as designed by Michael Lorde (set), Michael McDonald (lighting), Anya Gloudon (costumes) and Symmone Coombs (props), the production regularly takes on a vibrancy that reverberates throughout the theatre when one of the more strongly performed musical numbers (“Whatta Lovely Harvest”, for example) seizes the spotlight. So frequently the show looks great and sounds good.As for the story, Anansi (slyly played by Ray Jarrett) returns to Jamma-Land, with annoying wife and kids in tow, for a much-needed dose of goat-head soup to restore his vim and vigour. Meanwhile, cash-strapped farmer Marcus (Cadine Hall, a standout) is working hard to rein in his badly behaved ‘animulls’ Goat, Man Cow and Pig, who are wreaking havoc on the community, fearing that there’s a conspiracy afoot to have them become the entrée at the upcoming Indepen-dance celebrations. Together, they are a hoot.Will Anansi get his goat head soup? How will Marcus finally gain control of his wild animulls? Will Jamma-land have a happy Indepen-dance or will Anansi ruin the festivities?The national pantomime has traditionally worked best as an ensemble piece, with a reliable mix of experience and youth. But while Anansi and Goat Head Soup yields mixed results when it comes to the acting performances, it’s an enjoyable show that smartly capitalizes on its lighthearted spirit by appealing not only to the very young but the young at heart. What works, too, is that Gloudon knows she has struck gold with the talking animulls, and she wisely keeps them front and centre, giving them clever things to say. Tyrone’s Verdict: B