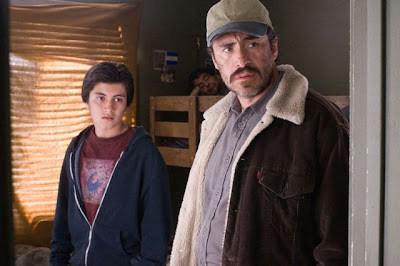 FAMILY TIES: Bichir (right) and Julián play an immigrant father-son duo in A Better Life.
The notion that family is paramount in a person’s life is vividly explored in A Better Life, a deeply moving and affecting drama about the ties that bind and the sacrifices attendant to a life marked by ambition and struggle. A touching story of a father’s love, the film also sheds light on what it’s like to live the illegal immigrant experience in the land of opportunity.Heading the small cast, Demián Bichir gives an exceptionally compelling performance as Carlos Galindo, a middle-aged Mexican immigrant in Los Angeles who relies on his small gardening business to make ends meet and provide for his unmotivated 14-year-old son Luis (José Julián). Everything Galindo does – from toiling tireless hours to finally purchasing a van to take his gardening business to a new level – is marked by dignity and an awe-inspiring determination to create for the boy the opportunities that he never had.“You don’t want to end up like me,” Galindo tells his son one morning over breakfast. But with a worrying proclivity for getting in hot water at school and proximity to Hispanic gang lifestyle, the boy is surrounded by the wrong distractions. It’s every single parent’s worst nightmare. Thankfully, Galindo has a kind sister (Dolores Heredia) close by who helps to raise the boy, however arduous the task.As is a common reality for many illegal aliens trying to pursue the proverbial American dream, trouble is always but a stone’s throw away. And rather unfortunately, Galindo’s already hectic world is sent into a tailspin when the theft of his vehicle ripples into an awful series of events leading to the involvement of the cops and the dreaded possibility of being deported and leaving his son behind.Like the audience-pleasing Oscar favourite A Separation, A Better Life (written by Eric Eason and directed by About A Boy's Chris Weitz) provides a terrific window view into the complex lives of strangers from disparate cultures, while illuminating the barriers that seem to separate us. As a meditation on American immigration policy, the film doesn’t break any new ground but sharply refocuses the spotlight on a perpetual issue in the national psyche.As the film’s anchor, Bichir (up for the Best Actor Oscar later this month) is a consistently engaging presence who makes Galindo’s plight memorably authentic. With his layered turn, he shows us both the deeply loving father and the hard worker driven by the hope of achieving a better life for himself and his son. Though Galindo’s circumstances might be far removed from your own, the starkly ubiquitous theme of struggle is one that surely resonates across all barriers. Tyrone’s Verdict: B+