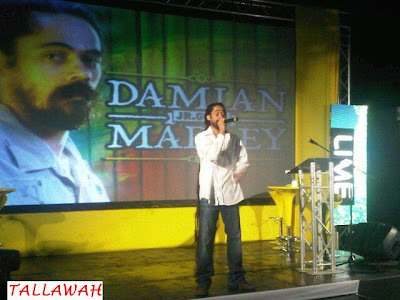 CENTRE STAGE: Jr. Gong thrills the crowd in song on Wednesday.
At age 33, Damian ‘Junior Gong’ Marley continues to break new ground as a highly-regarded reggae superstar. On Wednesday, Marley (the winner of three Grammy Awards) officially signed on to lend his star power to mobile company LIME as their newest ambassador. But in addition to his business association with the brand, Marley’s fans (as well as LIME customers) will be among the first to access new projects from the entertainer, including his highly-anticipated next album. In an exclusive chat with TALLAWAH following the big announcement (at the Bob Marley Museum), Marley spoke about this exciting new phase of his professional life, his winning combination with Nas, and who he is rooting for at this weekend’s Grammy Awards. On joining forces with rap star Nas for the acclaimed Distant Relatives album:“It was a good experience. Nas is someone that I am a big fan of; we had him on “Road to Zion” on the Welcome to Jamrock album, and that’s really where the friendship started. And then we really had the idea to come together and do an EP on Africa, and in the process of working on the EP, we decided to make it an album, and that is what became known as Distant Relatives – and album that is based upon the fact that all people, no care what race or religion or colour or whatever, we share a common African ancestry. And that was what the whole album was about. So since releasing the album we’ve toured the whole world together; we’ve been to Europe, America, Japan, Australia, a couple nice little places. So yeah, it was a great experience.”On why this new LIME endorsement matters deeply to him:“It’s important because it’s groundbreaking for music. It’s a demonstration into thinking of new and innovative ways of exposing music and distributing music. It feels good. It’s like a new adventure, and I look forward to being creative with LIME.”On his next solo album, a follow-up to 2005’s Grammy-winning Welcome to Jamrock:“I have not started working on it as yet. And I can’t really say yet what direction it’s going to take, but I don’t want it to be the same as my other albums.”On what he’s most proud of in his career:“I don’t really know, but I am proud to be able to have a career. Everytime you release a song is an achievement. It feels great.”On this weekend’s Grammy Awards, where his brothers Ziggy and Stephen are up for Best Reggae Album:“Well, it’s either Stephen or Ziggy [for the win]. Either way you take it (Laughs). But anybody who wins congrats to them.” 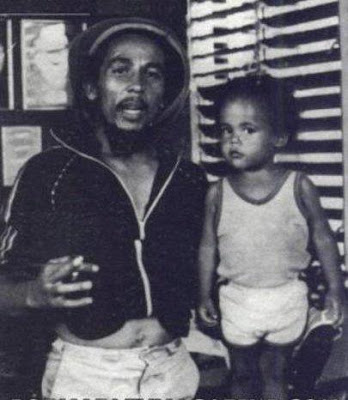 NOSTALGIA: Senior and Junior Gong, circa 1980.