EYES ON THE PRIZE: David Andrew Reid finds his strength in the arts 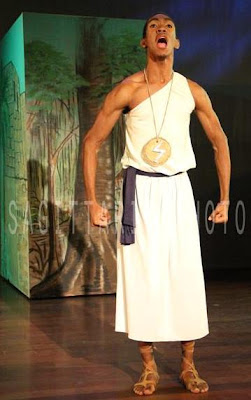 ALMOST FAMOUS: The actor sings his way to stardom.
With a classical-royalty pedigree (his grandfather is the tenor David Reid), a childhood spent in the company of oratorios and showtunes, and a promising career as a stage actor, David Andrew Reid seems possessed of a charmed life. Now, fittingly, Reid (a Wolmers old boy and UWI senior) is getting major notice as a leading man with the Jamaica Junior Theatre, turning in a sturdy performance in the titular role of their latest effort, Hercules. The 20-year-old rising star, who also performs with the Company Dance Theatre, dialed up TALLAWAH to talk about ambition, the joys of being a performer, and plans for his future.TALLAWAH: Playing Hercules, where did you identify most with the character?Reid: I’ve always been a small and scrawny boy, skinny and petite, and that’s how Hercules started out. But growing up I’ve always felt sort of more mature than my peers, and I’d use that to my advantage. I could also identify with the idea of being an outcast. And being like that, growing up wasn’t always easy. But you have to learn to push past what people say and focus on doing what you love and chasing your dreams.How did you prepare for the part?We had a lot of one-on-one sessions with the musical director, Danielle Stiebel, and Jason Jones, who has worked with the JMTC for years, helped us in getting the notes right and channelling the right emotions into the characters.What’s the most amazing thing about performing in a musical production?Broadway is my dream. I enjoy singing, acting and dancing. I can’t choose just one. So my favourite part about being in a musical is that I get to combine all three. I was really bummed that Hercules doesn’t get to do a lot of dancing in the show, so I tried to sneak in as much dancing as I could.What was your childhood like?I grew up in a very musical family; my grandfather is actually one of Jamaica’s oldest living tenors. My aunt also sings and mom plays the piano. I grew up on classical music and old ballads. No dancehall (Laughs).As you follow in your grandpa’s famous footsteps, what advice has he imparted about being an artist?He always pushes me to broaden my repertoire. He has about five drawers filled with musical scores that he’s always sharing with me. Whenever I’m singing around the house, he shows me how to sing the song better. My dad also pushes me. He tells me that my grandfather won’t be around much longer so I should learn as much as I can now.Outside your family, who are your icons who inspire you?I idolize Gerard Butler – he played the phantom in [the 2004 film version] of The Phantom of the Opera – and Hugh Jackman, who has been performing on Broadway for a long time. I also admire Idina Menzel and her husband Taye Diggs, who are big musical stars.Where do you see yourself in 10 years’ time?I am currently finishing up my degree in Management Studies at UWI, but I plan to apply do a second Bachelors in Musical Theatre, in Canada for September 2013. And that’s a programme that lasts for four years. After that I hope to be doing auditions. I, along with 2 other friends, will be launching our own production company later this year with the aim to produce official Broadway productions and small concert series showcasing world-renowned songs and pop culture. I ultimately see myself on the Broadway stage – or doing my very best to get there.