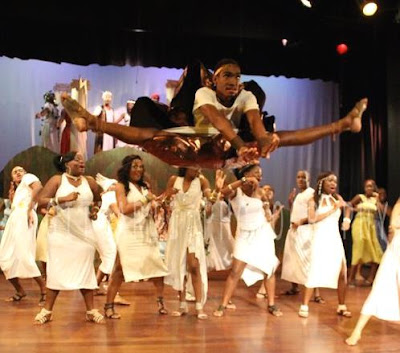 DEFYING GRAVITY: Reid soars above the chorus in Hercules.
Hercules (Jamaica Junior Theatre)Director: Peter HaleyCast: David A. Reid, Roshane Miller, Kenrick Sharpe and Damian ShawVenue: Philip Sherlock Centre, UWI MonaEven the mighty Greek gods had trials to overcome. But leave it to the exuberant cast and crew of the Jamaica Junior Theatre Company (led by director Peter Haley) to take a classic tale of Grecian myth and transform into a musical parable of self-discovery, heroism and family, and the eternal clash between good and evil.With their 2012 stage production, Hercules, the JJT has fashioned a frothy if spirited reimagining of the beloved Greek hero’s story, spun with youthful enthusiasm, modern flair and a cheeky appreciation for the hallowed source material. Beautifully designed, nicely choreographed and commendably acted, the show is an appealing treat largely rewarding audience interest with visuo-musical delight.The production follows young Hercules (David Andrew Reid), charting his journey from royal birth at Mount Olympus to Zeus (Roshane Miller) and Hera (Renique Harriott) to his kidnapping, eventual adoption and awkward adolescence. We witness his daily struggles to fit in among his village peers and gain control of his extraordinary physical strength, which comes as both a blessing and a curse.The core of the plot, however, revolves around Hercules’ mission to prove himself worthy of his godly lineage while balancing a budding romance with the comely Megara (Kristina Carty) and fending off attacks from his power-hungry uncle Hades (played with manic pizzazz by Kenrick Sharpe), the play’s arch-villain. 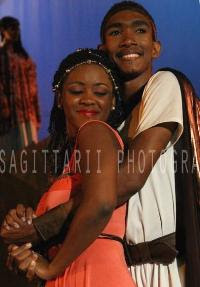 As wonderfully portrayed by Reid, Hercules dually embodies the honest, sweet heartthrob and the zealous warrior with a taste for the occasional wisecrack. With the performance, Reid proves himself an attention-worthy star-on-the-rise with ample capacity for authenticity and a singing voice endowed with potential. Witness his remarkable rendition of “Going the Distance” to close the show’s first half.As for the remainder of the cast, whatever they lack in conviction is made up for with consistently infectious fervour. Among the standouts: the terrific Damian Shaw as Philoctetes, the half-man, half-goat trainer of warriors, and Miller, who makes for a memorable Zeus.The show’s assortment of musical numbers (pop-rock hits and Broadway classics) makes a sterling contribution, especially when merged with the varied lighting, gorgeous costumes and lively movement. “Feeling Good” and “A Star is Born” are particularly rousing.And that happens to be an apt description for the show itself, which demonstrates that the combination of an enchanted story and stirring music is a potent formula for a spirited, entertaining affair. Tyrone’s Verdict: BHercules completes its run at the Philip Sherlock Centre this weekend. Tickets: 927-1047. [Photo cred: Karl Chin, Sagittari Photography]