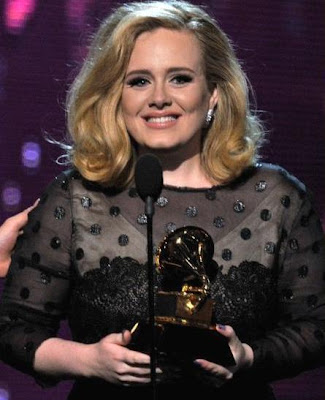 GOLDEN GIRL: Adele earns 6 Grammys, including Album of the Year.
The shocking death of pop icon Whitney Houston threatened to eclipse the night’s festivities but in spite of the shroud of gloom, there was an abundance of exuberance at the 54th Grammy Awards in Los Angeles on Sunday night, as the Recording Academy saluted the top entertainers of the past year on what has traditionally become known as music’s biggest night.As expected, pop music phenom Adele emerged the darling of the awards, winning all six awards for which she was nominated, including a sweep of the big three: Song of the Year, Record of the Year and Album of the Year for 21. Rock band The Foo Fighters also cleaned up with five awards, while rapper Kanye West took four, including the tightly-contested Best Rap Album.Appearing centrestage in the midst of a single spotlight to give a stirring, heartfelt rendition of Houston’s smash Hit “I Will Always Love You,” Jennifer Hudson brought the audience to its feet as she honoured her idol with an emotionally hefty performance.Among the night’s other big winners: Embattled singer Chris Brown won his first Grammy, taking home the Best R&B Album prize for F.A.M.E. Bon Iver took Best New Artist, Lady Antebellum won Best Country Album, while the hip-hop heavyweight duo of Jay Z and Kanye West copped Best Rap Solo for “Otis,” off their platinum-selling collaborative effort Watch The Throne.But the night belonged to Adele, who turned heads on the red carpet earlier in a stunning Armani Prive gown, completing her glamorous appearance with a dewy-fresh face and a bold red lip. Making her post-surgery return to live performance, the beloved British songbird gave an ovation-inducing rendition of her monster hit “Rolling in the Deep,” the song which secured her the wins for Record and Song of the Year.For the full list of winners, click HERE. 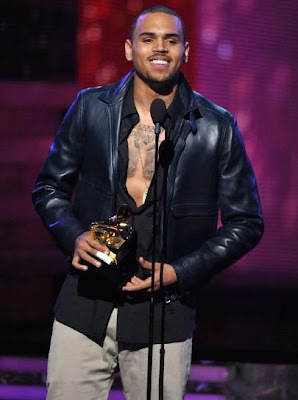 
Posted by TALLAWAH Magazine (tallawahmagazine@gmail.com) at 11:50 am