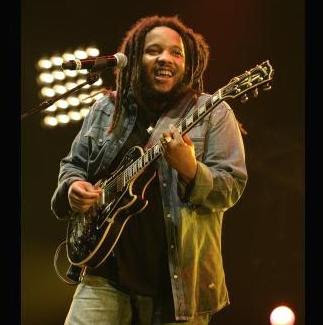 STRING THEORY: Marley in performance.
Besting a field that included Monty Alexander, Shaggy, Israel Vibration and brother Ziggy, reggae singer and uber-producer Stephen Marley snagged the Best Reggae Album award for Revelation Part 1: The Root of Life at the 54th Grammy Awards in Los Angeles Sunday evening. The announcement was made during the annual pre-Grammy telecast, where a host of other early winners like Kanye West, Skrillex, Taylor Swift and Adele were also announced.Stephen is now a 10-time Grammy winner as a solo artist, producer, and member of Ziggy Marley & The Melody Makers. In an interview with TALLAWAH last month, Stephen noted that he’s getting set to release his next effort Revelation Part II: The Fruit of Life in April.>> Exclusive: Stephen Marley talks Grammys and growth

Posted by TALLAWAH Magazine (tallawahmagazine@gmail.com) at 11:38 am