KILLING ME SOFTLY: Bittersweet Love has its heart in the right place 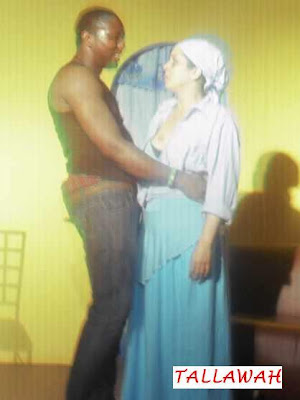 DANGER & DESIRE: Hanchard and Khan share the spotlight.
Bittersweet Love (Power Play Productions)Director: Clive DuncanCast: Nadia Khan, Robert Hanchard, Clive Duncan, Melisha Holness, Janice Darling, David Crossgill and Mark BrissettVenue: Green Gables Theatre, KingstonIf there’s anything trickier than knowing someone, it’s knowing yourself. That’s a big lesson Hilda (Nadia Khan) learns the hard way in Bittersweet Love, an intriguing, if inconsistent, stage production from actor-writer-director Clive Duncan that recently wrapped a month-long engagement at Kingston’s Green Gables Theatre.Part intense domestic drama, part uproarious farce, the play focuses on longsuffering Hilda, who is caught in a tempestuous common-law relationship with Fanso (Robert Hanchard), an abusive alpha-male type with little more than sex and horse-racing on the mind. As the plot unfolds, Hilda struggles to come to terms with the stark reality that her no-good man is killing her slowly not only with his brutish temper (in the tradition of Stanley Kowalski) but also with his incredible lack of ambition. Not until Fanso’s misdeeds and secret past catches up with him does Hilda finally open her eyes.In spite of her naiveté, which some might find irritating, the audience roots for Hilda. Not least because she is portrayed by Khan, who brings trademark skill to the part and lends ample credibility to Hilda’s flaws and tribulations. What becomes clear, too, is that Duncan is proving himself a veritable triple threat. In addition to writing and directing, he brings a shrewd intensity to the supporting role of BJ, half of a bumbling criminal duo (alongside Crossgill’s idiotic Dusty). There are also sporadically strong performances by Janice Darling (as the straightforward Dawn); Mark Brissett (the suave Rammy); and Melisha Holness, who appears as glamorous wild child Tia.Though Duncan demonstrates the ability to weave plot points into an interesting narrative, the whole thing is at times convoluted. But that’s not to say Bittersweet Love doesn’t succeed in making perceptive statements about human relationships, greed, lust for power, and how we often sacrifice our happiness in pursuit of that tricky thing called love. Tyrone’s Verdict: B


Posted by TALLAWAH Magazine (tallawahmagazine@gmail.com) at 1:14 am