ASAFA'S NEW HONOUR: “I learn to be positive about things” 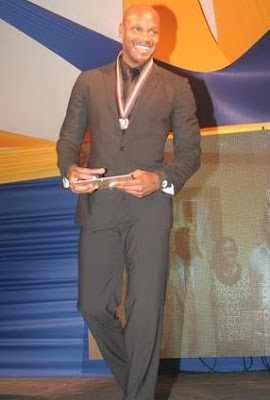 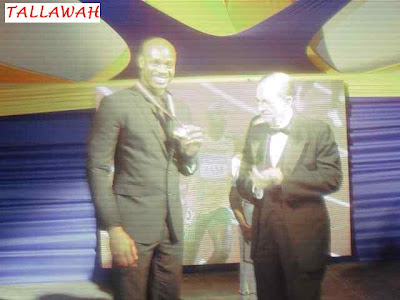 GOLDEN BOY: Powell receives the prestigious award from UTech Chancellor, Edward Seaga, during a ceremony at the Terra Nova Hotel.
On Saturday night, during an exquisite black-tie ceremony at the Terra Nova Hotel in Kingston, superstar athlete Asafa Powell was presented with the prestigious Chancellor’s Medal by UTech Chancellor Edward Seaga and anointed the first international ambassador for the Diana Awards by CEO Margaret Turner, OBE.

In his succinct response to the gathering, the 29-year-old brought a bit of humour and his signature low-key style to the podium, reflecting on his eventful career in athletics and expressing gratitude to those who helped him get to this remarkable juncture:

“Tonight is a time to give thanks, and I want to give God thanks for sparing our lives to be here and to the University of Technology. I went to the UTech in 2001, and I didn’t know that I would [one day] be getting this highest honour that the school can give out. And I’m wondering what I can do with it. If I can take over the school. (Laughter).Yesterday, I met with the Governor-General and Lady Allen and a representative from the Princess Diana Foundation, and I am humbled to be selected as the first international ambassador for the Princess Diana Awards. And I want to thank my sponsors LIME. They have been with me through and thick and thin. But mostly thick. I want to thank them for being there. I don’t even know how to put credit on my phone; credit is always there. Free money.And I thank the government and the people of Jamaica for supporting me over the years. I get nothing but love. I learn to be positive about things; that’s the way I was brought up. My parents show me the right way, and seeing negative and positive just makes us stronger. And I am growing stronger everyday. Thanks to my parents for growing me in that way.And my coach, Stephen Francis; he is something else. He saw this little country boy from Charlemont, and he saw the talent, and he believed in me so much. And when he told me that I could break world records I laughed at him. I didn’t believe, and he made me believe in myself. I trained hard, I broke the world record, and I’ve been on top for so many years, and he is the cause of that. And even today, I heard him on the radio saying that I can do it. So I want to thank Coach for being there and motivating me.One thing I always say to myself is that I can do all things through Christ who strengthens me. And I believe in that.”