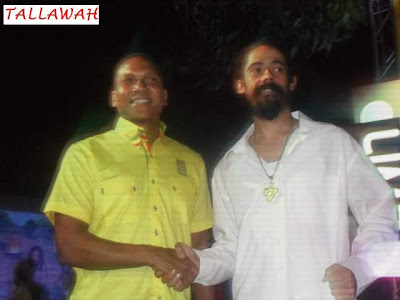 SEALING THE DEAL: Dehring and Marley at Wednesday's LIME announcement.
“There is no doubt that this is a special partnership,” says LIME chairman, Chris Dehring, in making the announcement that Grammy winner Damian Marley has agreed to join the LIME family as their newest brand ambassador. The announcement came Wednesday evening at a well-attended special event on the ideally selected grounds of the Bob Marley Museum in St. Andrew.Via this new two-year partnership, Junior Gong’s legions of fans, as well as LIME customers across the region, will be among the first to hear new music, see exclusive content and follow the star on his journey to producing his next album via LIME’s mobile internet and television portals. A special web portal (limeportal.ogangi.com) has been developed for smartphones and other mobile devices on the company’s network.Addressing the gathering, Dehring admits that this move is a strategic one for his company. “This is the age of digital convergence and so as more persons begin to depend on an electronic device for their business and entertainment needs, this move is particularly strategic for us as we continue to position ourselves as the premier provider of entertainment content in the region,” Dehring said.For his part, Marley openly welcomes this new chapter in his professional life. “I am very pleased at the possibilities that exist through this partnership with LIME,” Marley says. “These days, everything is driven by technology, and so I am looking forward to connecting with my fans on an even greater level.”To whet appetites, attendees at Wednesday’s event were treated to the exclusive world premiere of Junior Gong’s latest music video, “Affairs of the Heart”, as well as a quick performance from the artiste, who is also promoting a gritty new single called “Set Up Shop.”>> WATCH - Junior Gong on the mic:

Posted by TALLAWAH Magazine (tallawahmagazine@gmail.com) at 12:02 am