TALLAWAH MOMENT: Ian Boyne and a quarter-century of Profile 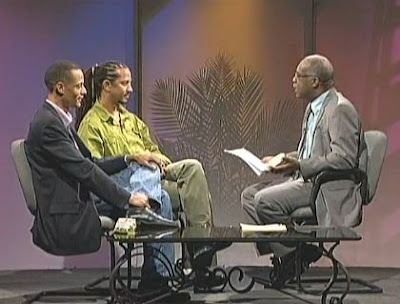 HOT TOPIC: Boyne interviews a pair of entrepreneurs.
Through his long career, media powerhouse Ian Boyne has never been one to shy away from the harsh glare of the spotlight. After all, Boyne, like many of his well-thinking colleagues, understands what can be had through resilience and by going against the proverbial grain. (Witness his often controversial Religious Hardtalk). Boyne has enjoyed such a long, arduous run in journalism to the point where Jamaicans now join him in observing the 25th anniversary of his reliable, widely-watched interview programme Profile, which airs each Sunday evening on TV J. “I have to be able to match wits with minds from all fields, while being able to deal with all types of personalities, even difficult ones,” observes Boyne in a reflective piece which ran in last Sunday’s Outlook. “We have an excellence code that demonstrates our belief in that we can learn lessons from the lives of the people we interview.”The milestone of Profile’s silver anniversary is a remarkable one, to be sure, and thanks to the fearlessness of its tireless host, it continues to encourage us to indulge in a little escape into the lives of others in pursuit of bettering ourselves and, ultimately, our nation.