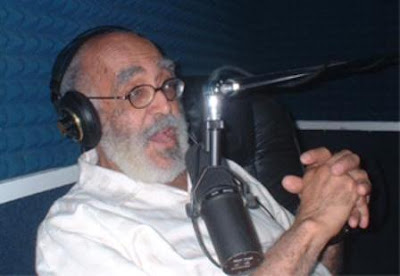 LIVE AND DIRECT: Perkins brought incisive talk to daytime radio.
Wilmot ‘Motty’ Perkins, who passed away last Friday morning at the age of 80, was not only a highly respected veteran Jamaican journalist but also an outspoken and controversial presence on daytime radio during a career that spanned several decades. Perkins first radio programme, What's Your Grouse, aired on RJR in 1960. He later moved to the Jamaica Broadcasting Corporation (JBC) to host Public Eye and then HotLine in the 1970s and 80s. When KLAS FM arrived on the scene in the 1990s, Perkins hosted Straight Talk. Yet another move took him to Hot 102 FM, where he hosted Perkins OnLine. In April 2002, he that programme to Power 106, and he worked there until earlier this year. Perkins On Line introduced him to a whole new generation of listeners, many of whom called in regularly to engage their beloved Mr. Perkins in discussions on everything from domestic affairs to local and international politics. As a columnist, Perkins wrote for both The Gleaner and The Sunday Herald at different times.With his biting commentaries and razor-sharp intellect, Motty not only inspired Jamaican, he challenged us, in his own way, to hold our leaders to account, a trait for which he was loved and hated in almost equal measure.Information minister Sandra Falconer said Perkins’ passing has robbed Jamaica of an outspoken and fearless journalist and talk-show host who would never back down from his convictions about any issue. “Our nation needs journalists who keep debates about issues in our society alive, and radio talk-show host Motty Perkins was supreme,” Falconer said. “His programme welcomed all guests, but his discussions were rightfully tuned to challenge the actions and statements of persons who hold elected office. Despite his incisive thoughts about leaders, he was still a simple man who could laugh with and express genuine sorrow with his callers from all walks of life who shared their stories with him on a daily basis.”The Press Association of Jamaica (PAJ) also paid tribute to the late media giant, noting that for years Perkins gave voice to the voiceless and could be depended on to champion the cause of the oppressed and the victimized at all times. “Mutty was a well informed, fiery journalist who was willing to challenge the establishment and question every statement placed before him,” said PAJ President Jenni Campbell in a release. “There is no doubt that the local media landscape will be poorer with the passing of Perkins.”We extend our condolences to Perkins’ widow of 56 years, the broadcast practitioner Elaine Perkins, his family, and close friends.