REMEMBRANCE OF THINGS PAST: Honor Ford-Smith on safeguarding our cultural legacy 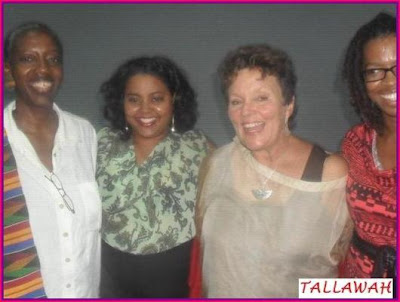 LEADING LADIES: Ford-Smith (second right), with Carolyn Allen, Scarlett Beharie and Nicole Brown, photographed at the School of Drama.
Whether she is illuminating the concept of 1930s Garveyism as a contentious mode of nationalism or explaining how the efforts of the late great dramatist Dennis Scott led to bold experimentations in the seventies, noted scholar and playwright Dr. Honor Ford-Smith is never less than an insightful presence behind the mic. Engagingly addressing a sizeable gathering at the Edna Manley School of Drama on Wednesday evening as part of a special Jamaica 50 symposium on local theatre (“Performing Nation”), Ford-Smith put forward compelling arguments for how such icons as Garvey, Scott, Sylvia Wynter and Stafford Ashani helped to mould our rich history of cultural performance, why their collective legacy bears great relevance at this moment in the life of the nation – and why it is imperative that we “figure out a vision that makes us globally competitive” in the arts for the next 50 years.But although Jamaica has much to celebrate and be proud of at this juncture, Ford-Smith emphasizes, the preservation of what we do have and the respect we show to the forebears who helped make the culture so opulent is paramount. “In a sense we are a society, as Walcott says, that is based on amnesia, of forgetting. So there is a lot that we still have to negotiate,” observes Ford-Smith, who is an Associate Professor at Canada’s York University and a contributor to the anthology 3 Jamaican Plays.

“And one of the things that I always talk about is the importance of remembering the ordinary people who fought particularly heroic struggles," she notes. "Amy Jacques is one. For some reason, she is not buried next to Mr. Garvey. She is buried at the Half Way Tree parish church. Her grave doesn’t look nice. Her sons don’t live here. But to me, it’s the responsibility of the whole society to keep those kinds of historic sites going.”

Adds Ford-Smith, “Maybe because I am getting old I am picking up these things, but I do think that in society, where our heroes are buried, their graves, the commemoration serve as instigation for inspiration. So I think we need to look at significant ways to keep their memories alive and with us.”

Posted by TALLAWAH Magazine (tallawahmagazine@gmail.com) at 12:50 am