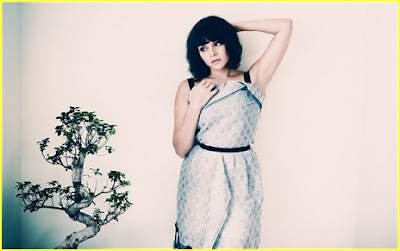 MISS JONES REGRETS: The artist sings of lost love on new album.
How do you like your Norah Jones? Calming and mellow or with a jolt of sheer femme fatale? Regardless, the queen of folk-pop is exploring darker territory with her enthralling latest effort, Little Broken Hearts. (The astonishing cover art is an homage to the intense 1965 Russ Meyer film Mudhoney.) Though the album announces an edgier mood for the multiple Grammy winner, Hearts, her fifth studio disc, carries traits of a typical Jones record: confessional-style lyricism, hauntingly rich melodies – not to mention a fine showcase of that bewitching voice.According to Jones, Hearts (Blue Note Records) was inspired by a harsh breakup with her writer-boyfriend. Little surprise then that her listeners are in for an emotionally-charged meditation on disappointment, heartache, and a hint of film noir-esque vengeance. To wit, the sly, acoustic guitar-accompanied “She’s 22” is aimed at an ex-lover and his new (younger) woman. Similarly, the melancholia-spiked “After the Fall” is equal parts regret and reminiscence.Free of misfires, the 12-track album draws on the chanteuse’s now-signature mix of soothing vocals and spare instrumentation. In fact, essential cuts like the atmospheric opener “Good Morning” and the soft-rock-infused title track would not be out of place on such previous efforts as 2004’s Feels Like Home and 2007’s Not Too Late.Given her remarkable oeuvre (which, of course, includes the instant-classic 2002 debut Come Away With Me), one could be tempted to put forward the argument that Norah Jones’ best work is behind her. But while this new record won’t dramatically impact the arc of her career, Little Broken Hearts (produced by Gnarls Barkley’s Brian ‘Danger Mouse’ Burton) represents a fascinating new step in her artistic evolution. Or, Miss Jones is just shaking up her good-girl image with a brief romp on the wild side that has lent her music a starker palette.In any case, Norah Jones remains a classic talent with a timeless sound that needn’t ever worry about finding an appreciative audience. Tyrone’s Verdict: B+