BORN TO RUN: Usain Bolt on his ‘wow’ factor and looking to London 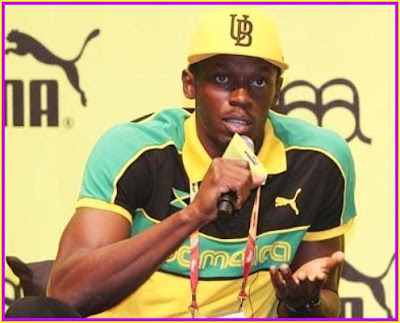 WITHOUT LIMITS: “I’m on the road to peaking,” says the star athlete.
“This summer, all eyes be on Usain Bolt as he tries to repeat his gold-medal hat-trick [from 2008’s Beijing Games],” observes MSNBC’s Brian Williams on Rock Centre last Wednesday. And, of course, he is absolutely right. Though July’s London Olympics are some 90 days away, the spotlight is already being acutely trained on the Bolt-led Jamaican contingent, which is expected to dominate the Games, especially in the sprints.As such, everyone is seemingly obsessed with the details of the triple world-record holder’s ongoing preparations – and what it takes to be the World’s Fastest Man surrounded by aspirants eyeing the crown. The sprinter knows the great expectations that have been thrust upon him, but the good thing is Bolt has managed to draw parallels between what global spectators long to witness and what he firmly expects of himself. “After the London Olympics, people should say ‘Wow’, sit back in their chairs for a minute and think about what just happened,” he tells Williams with a hint of élan. “I want to just wow people, stun the world.”While there is widespread speculation as to whether Bolt can dip below 9.5 seconds and 19 seconds in the 100 and 200 M respectively, the 25-year-old star declines to make any promises. “My coach says I’m not gonna peak until I’m 26,” he confesses. “So I’m on that road to peaking, and I’m looking forward to it.”

Visit msnbc.com for breaking news, world news, and news about the economy