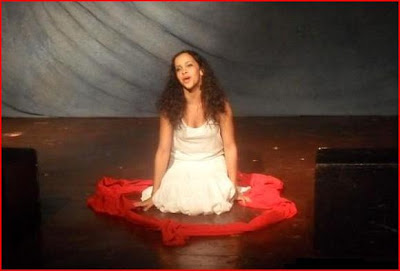 PLAY IT AGAIN: Kerr in "My Vagina Was My Village," Kingston, 2011.
The Vagina Monologues (Sankofa Productions)Director: Fabian ThomasCast: Noelle Kerr, Hilary Nicholson, Althea Hewitt, and Leonie ForbesVenue: Philip Sherlock Centre, UWI Mona.Vaginas are incredibly needy and talkative. And they’re prone to launching into a super-sized hissy fit when they don’t get what they want when they want it and how they want it. Bitches. You don’t want to end up on a vagina’s bad side (see “The Angry Vagina”). As if they feel they deserve any less, a troupe of these vagina warriors, moody and frequently dramatic, took over the Philip Sherlock Centre last Friday night. Why? Because “we were worried.” Coincidentally though, the occasion marked this year’s observance of V-Day Kingston and another Fabian Thomas-helmed revival of Eve Ensler’s deliriously entertaining The Vagina Monologues.Brought to life by a cast of varied performance experience, the show’s sequence of solos and group pieces unfolded before a packed house that never skimped on the (sometimes) vociferous applause, particularly the clear first-timers. Ensler virgins. While this revival yielded mixed overall results, Ensler’s critically acclaimed work hasn’t lost an iota of its power to amuse, enlighten and provoke thought in almost equal measure.As could be expected from a work that aims to illuminate the wide-ranging and complex relationships/experiences of women and their genitalia, there were moments that failed to spark (“Because He Liked To Look At It”) and others that just hit the spot. On the upside, Noelle Kerr did compelling work with the heartrending “My Vagina Was My Village” and (along with Neisha-Yen Jones) in the droll “The Woman Who Loved To Make Vaginas Happy.” And while it transported viewers across time lines – from Susie Braham’s clever “A Six-Year-Old Girl Was Asked” to Hilary Nicholson’s spot-on stint as a woman in advanced age (“The Flood”) – there were time-honored pearls of wisdom along the way. Like this gem from Shawna-Kae Burns’ “The Angry Vagina”: “Don’t let him tell you it smells like rose petals, when it is supposed to smell like p---y.” Heard that. Tyrone’s Verdict: B