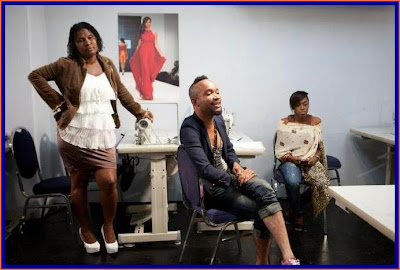 STYLE SAVVY: Williams (centre) hangs backstage at MC.
Reality TV is no walk in the park, and Mission Catwalk, with its mix of creative rigour and heart-stopping thrills, is certainly no exception. But that’s precisely what drew designer Gregory Williams to the hit fashion reality series in the first place. “I love the experience because as a designer I love to challenge myself,” says Williams, who has so far managed to avoid elimination, after three episodes of the 2012 season. “So it was really an experience that I wanted for myself because of course it is a reality show, and I always wondered what it’s like going through the whole adrenaline rush and meeting deadlines.”Speaking with TALLAWAH at last month’s Season Two premiere party in Barbican, Williams was also quick to deflate certain misconceptions people might harbour about a reality series like MC. “It’s not as easy as it looks because, for one, you have to get up very early and go home late,” says the 28-year-old Kingston native. “But at the same time you can’t make it look that way. Like if you’re tired you can’t make it show. So for me personally I don’t show it.”In addition to landing one of the final 15 coveted spots on this season of MC, Williams’ accolades include the 2011 Avante Garde Designer of the Year award, presented by Saint International. Looking ahead, he says there’s no limit to his plans for the future. “I want to show at London Fashion Week. That’s my aim,” he tells me with a laugh. “Every designer wants to expand their business, so for me it doesn’t stop here. Even with Mission Catwalk, after this I’m still going to try to go bigger and bigger. There is no end to fashion, and as a designer you have to keep pushing yourself because there’s no limit. You can’t get too comfortable. You just have to keep going.”