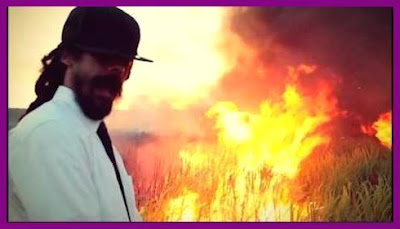 CATCH A FIRE: Striking visuals abound in Junior Gong's latest.
After four albums and three Grammys, Damian “Gong-zilla” Marley has managed to make a significant dent in the popular cultural psyche not only as a worthy heir to his father’s storied empire but as a clinical observer of the human carnival. Buoyed by his one-of-a-kind songwriting potency and hard-hitting, thought-provoking messages, the 33-year-old lyrical activist has managed to set himself apart from reggae’s greatest contemporary stars. As evidenced by his most recent solo hit, “Set Up Shop,” his music continues to be heavily influenced by the heart and mind concerns he has for Jamaicans at home and the standard of living they have to grapple with daily. Given the harsh economic realities, entrepreneurship (or hustling, in the Jamaican parlance) is perhaps the best bet for survival. And this is precisely what Marley dually celebrates and advocates in the song and its just-arrived accompanying video (directed by Winston Mayhew), a well-made clip full of stark and striking imagery and featuring Junior Gong in his fiery element.