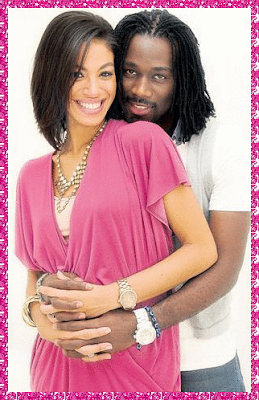 WE FOUND LOVE: Chino and Yendi on affairs of the heart.
One sure-fire way to know a woman is in love: she giggles nonstop, school-girl style, when talking about the special man in her life. Yendi Phillipps is no exception. The fresh-faced beauty and her loverboy Chino sat down for a revealing and chuckle-filled chatfest with the Observer earlier this week, dishing on their hot romance, how they became an item, and looking ahead to the birth of their first baby.By her own admission, Yendi has never had a love like this. “I’ve never felt more respected. I’ve never felt more regarded,” she notes. And almost immediately one senses a comparison to her previous (failed) relationship with sprint star Asafa Powell. To wit, Phillipps confessed exclusively to TALLAWAH this past January the reason(s) for the collapse of their affair. “As a woman, I hold certain values and standards for myself,” she said. “I feel like I was raised by a man who is of exemplary character. And as such I hold certain values and standards. And because of that I just felt as though things had to go in a different direction [with me and Asafa]. I felt it was for the best.”By all appearances, these days Miss Phillipps’ love life is marked by a more harmonious tune. You get the feeling that she’s finally found what she’s long desired out of a relationship. What’s more, a sincere dynamic is what she seems to share with Chino McGregor, whom she affectionately refers to as ‘D’. “I feel very cared for,” says Yendi, who is 17 weeks into her pregnancy. “You know when something happens, and the first thing you want to do is pick up the phone and call that person? This is who I want to call. He doesn’t say much; he’s not a talkative person, which gives me room to say a lot. (Giggles). But when he does speak, he’s very profound. I love his mind space. And, yeah, he’s a nice one. He’s a keeper. (Giggles).”Miraculously, Chino did manage to get a few words in. The genesis of their romance, he explains, was an effortless enterprise. “It didn’t feel new. It wasn’t a situation where I approached her or vice versa. It was just one of those situations that just happened,” the singjay admits. “Does it look like love? Quite so; you can feel it. It’s nothing that we put an effort into. We’re soulmates.”STORY: Yendi Phillipps and Chino announce their pregnancyEXCLUSIVE: Yendi talks women in power and leaving AsafaMUST READ: Chino dishes on Yendi and his legacy