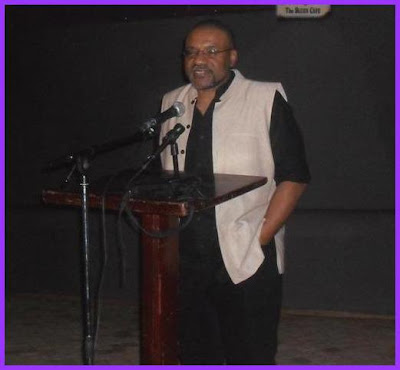 FREEDOM OF SPEECH: Dawes at the Red Bones Blues Café, 2011.
Though he’s no stranger to winning accolades for his work, Jamaica’s Kwame Dawes has snagged one of his most prestigious honours yet. TALLAWAH joins the Calabash International Literary Festival Trust in congratulating the acclaimed poet, author and professor on being awarded the 2012 Guggenheim Fellowship for Poetry. Calling it a “tremendous honour,” Dawes expresses his gratitude. “I have long regarded the Guggenheim Fellowship as a clear indication of the quality and significance of the work of American artists and artists from around the world, he remarks. “This is a generous award and a tremendous honour. I am grateful to all those writers who wrote in support of this award. My family and I are thrilled.” Among the most highly coveted in the world, the Guggenheim fellowship was established in 1925 intended for men and women who have demonstrated exceptional capacity for productive scholarship and exceptional creativity in the arts. Though it received some 4,000 applications each year, the John Simon Guggenheim Memorial Foundation only grants approximately 200 annually. A reception for this year’s Guggenheim fellows will take place on May 9 in New York City.The Guggenheim award comes on heels of Dawes being presented with the Barnes and Noble 2012 Writers for Writers award this past March and an Emmy in 2009. A proud son of the Jamaican soil, Dawes says his 2004 Silver Musgrave Medal from the Institute of Jamaica holds special significance, as his late father Neville Dawes was at one time director of the Institute. Currently the editor of the acclaimed literary journal Prairie Schooner and the Chancellor’s professor of English at the University of Nebraska, Dawes’ numerous books include the novel She’s Gone, the musical biography Bob Marley: Lyrical Genius, and the memoir A Far Cry From Plymouth Rock. 2011’s Wheels is the latest of his 16 volumes of poetry. Dawes is also the editor of many other volumes such as the poetry anthologies So Much Things to Say and Jubilation!. In 2001, along with Colin Channer and Justine Henzell, Dawes founded the Calabash International Literary Festival, which is set to return to Treasure Beach, St. Elizabeth, on the weekend of May 25-27.