‘MARLEY’ is a gem: What America’s top critics are saying… SUITED FOR THE PART: Marley documentary earns stellar reviews.
“Marley is a detailed, finely edited character study whose theme – Marley’s bid to reconcile his divided racial legacy – defined his music and his life.” – Stephen Holden, New York Times “Marley celebrates the fact that its subject is still among us in the way that perhaps matters most: His music not only survives, it thrives.” – Steven Rea, Philadelphia Inquirer “This film is long. But it grabs one's senses and won't let go.” – Steve Morse, Boston Globe“Clocking in at nearly two and a half hours, it is gripping from the start, not just because of the quality of the music, but because of Marley's magnetic, challenging personality, as well.” – Billy Goodykoontz, Arizona Republic “The narrative does a solid job of explaining key elements of Marley's keen sensibility, including his deep identification with outsiders and his encompassing world view.” – Jim Farber, New York Daily News“Documentaries fully authorized by the subject's surviving family members are rarely this rich.” – Michael Phillips, Chicago Tribune “Marley, an ambitious and comprehensive film, does what is probably the best possible job of documenting an important life.” – Roger Ebert, Chicago Sun-Times“Thoroughly researched and packed with phenomenal archival footage, it's a rousing tribute to a mesmerizing performer that forgoes blind hero worship.” – Melissa Anderson, Village Voice “Marley, by reminding us of the longing and the indignation from which the music leaped, does a grand job of turning the volume back up. If only it had found more time to stop and listen.” – Anthony Lane, New Yorker “[It] shows off his chops not by doing anything dazzling - the film is documentary prose, not poetry - but by treating Marley as a man of depth and nuance, of inner light and shadow.” – Owen Gleiberman, Entertainment Weekly “[A] generous, absorbing, family-authorized docu on the late, still-reigning king of reggae music.” – Guy Lodge, Variety “Chronologically organized and voiceover-free, the movie is a 145-minute patchwork of old concert footage and talking-head interviews -- lots and lots of them -- from people who knew, loved, and worked with the reggae giant.” – Dana Stevens, Slate“The enormous popularity of the transcendent reggae superstar shows no signs of abating, a situation Marley, a moving and authoritative new documentary, takes as its mission to illustrate and explain.” – Kenneth Turan, Los Angeles Times “Stylistically unremarkable, playing it safe with structure, the film is still quietly revelatory.The director, Kevin Macdonald, searches for clarity amid the contradictions of Marley's life and reaches no conclusions, but that's a tribute to his subject's complexity in a film of fascinating too-muchness.” – Ian Buckwalter, NPR “It's at once leisurely and controlled, like a Bob Marley song, with fresh secrets in every groove.” – Stephanie Zachareck, Movieline “You see a man, flawed and imperfect, finding his way through with his music, constantly searching for his place in the world until that quest was cut tragically short.” – Rene Rodriguez, Miami Herald “The bloat and heft of the doc's narrative scope leaves the viewer awash in a sea of historical "facts" with very little sense of the human experience behind the curtain of celebrity.” – Glenn Heath Jr., Slant Magazine“I'd have preferred more of the material presented during the final credits, a montage showing Marley's influence and fanbase in different parts of the globe.” – Christopher Campbell, Movies.com“Marley is poignant, funny and, at times, heartbreaking, especially when the specifics of his health decline are revealed, with photos. The film paints a vivid portrait of a pioneering artist, yes, but it also reveals that at his core, Bob Marley was, simply, a man. That’s what makes his story so real, so beautiful.” – Regina Robertson, Essence Magazine 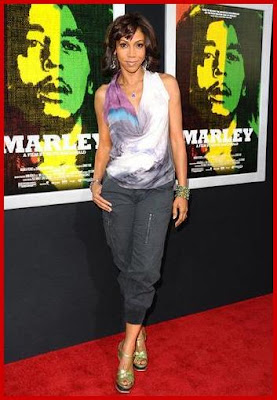 
Posted by TALLAWAH Magazine (tallawahmagazine@gmail.com) at 11:22 am