OUT OF AFRICA: Emotionally charged Ruined is a solid piece of work 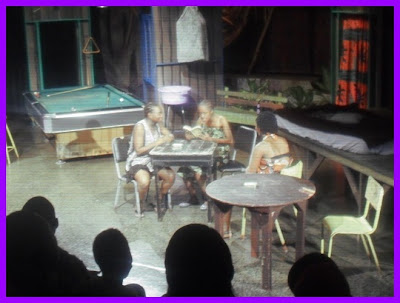 LOST GIRLS: Smith, Cross, and Gardner in Lynn Nottage's Ruined.
Ruined (School of Drama Production)Director: Eugene WilliamsCast: Risanne Martin, Kimberley Smith, Paul Wilson, and Bob KerrVenue: Dennis Scott Theatre, Edna Manley CollegeWith the sad eyes of a pup, she sits uncomfortably on a stool at the brothel bar while her boss Mama Nnadi and uncle Christian engage in lighthearted chatter. Her head droops pitifully. She responds to the adults meekly, respectfully. When she gets up and walks over to the microphone to serenade the room in song, she moves with the curious waddle of a duck, her legs stretched wide apart. It isn’t difficult to understand why.Meet 18-year-old Sophie, one of the four damaged women who populate Lynn Nottage’s searing Pulitzer-winning drama Ruined, which recently enjoyed a two-week staging (under Eugene Williams’ sure-handed direction) at the School of Drama.Set against the backdrop of the horrific five-year-civil war that rocked the Congo – and appalled the world – the work forcefully examines the ruthless use of rape as a tool of war and how it impacted the lives of the country’s most vulnerable, particularly young women, poor and poorly educated. Young women like Sophie (nicely played by Kimberley Smith). And Salima (Natasha Cross). And Josephine (Renae Gardner). And Mama Nnadi, the play’s riveting heroine portrayed with conviction and flair by Risanne Martin. But it’s Sophie, savagely sexually assaulted to the point of “ruin, ” who gives the play its most painfully human dimension.Most of the action unfolds inside the run-down jungle-based brothel owned by Mama Nnadi, who governs the establishment with an iron fist. The girls live and work there as prostitutes. While the war rages on outside the walls, the place is a popular hangout for a mixture of soldiers, war lords, prospectors and miners who come for the booze and sex. Nottage paints a captivatingly grim (yet realistic) picture of the struggles these women endure daily, but she throws a sense of optimism and ambition into the mix which serves to complement the play’s more appealing themes of family, compassion, and the price of dignity.The performances ring authentic, particularly those of the four actresses, who seemed to have little difficulty with the African accent. With her pitch-perfect performance, Martin shines, rivaling the stage’s luminous lighting. She is ideally cast. Also noteworthy: Samuels, as the officious militia leader Commander Osembenga; Kerr as the liquor-loving Mr. Harrari; and Wilson as the sensitive professor and uncle.As one character voices half-way into the play, “In Congo it is more dangerous to be a woman than a soldier.” It’s a harsh truth made all the more arresting by overwhelming rape statistics. Buoyed by well-drawn characters and a raw, powerful subject matter, Ruined offers a deeply affecting portrait of hope in a hopeless place – and succeeds in putting a human face on some of the atrocities in that corner of the Motherland where, even today, other Sophies are hanging in there. Tyrone’s Verdict: B+