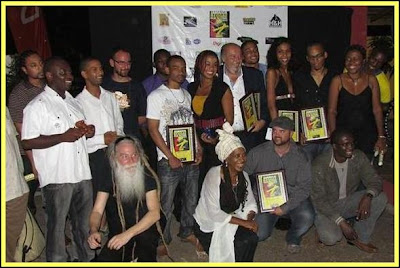 MEMORABLE YEAR: Winners pose together to close RFF 2011.
Nothing sweetens labour more than the promise of an attractive cash prize. And no doubt, the first-place award $50,000 continue to entice up-and-coming filmmakers to bring their A-game to this year’s Make-A-Film-in-24-Hours competition at the 2012 Reggae Film Fest, which kicks off with registration on Monday.As organizers reveal, efforts to give cash as second and third prizes for this year’s competition have not been successful. What’s more, since the RFF has been unable to co-ordinate fully with Caribbean partners, the promise of a trip to Trinidad is no longer on offer as part of this year’s first prize. But the competition has gained several alternative prizes for second and third place winners (that should provide equally enticing incentives), including film training scholarships, luxury North Coast vacations and digital equipment. “We are certain the absence of cash prizes will not deter any potential competitor’s determination to enter and win the RBC Make a Film in 24 Hours competition,” offers showrunner Barbara Blake-Hannah. “We hope the examples of filmmakers whose careers began with the competition, will inspire all to take advantage of the opportunity to make their names as film makers. The Reggae Film Festival looks forward to an exciting competition and some excellent films.”Previous winners of the competition include Jay Will, Craig ‘Amaziyah’ Kirkland and Vanessa Phillipps. Tanya Taylor and Leahcim Semaj will serves as this year’s judges.

>> GET MORE: For additional info on this year’s festival, including the full schedule of screenings and related events, visit reggaefilmfestival.wordpress.com.