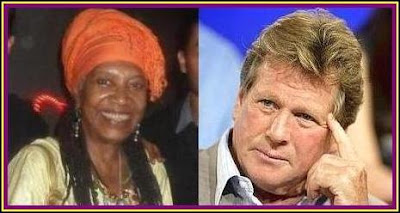 ON THE REEL: Blake-Hannah (left) and O'Neal.
Those among us who were hoping to catch a glimpse of famous Tinseltown actor Ryan O’Neal at this year’s Reggae Film Festival will be disappointed to learn that the Oscar-nominated star of 1970’s Love Story will be a no-show at the event, scheduled for April 17-21 at the Pegasus Gardens, New Kingston. What’s more, Slumber Party Slaughter, the new thriller/horror flick in which O’Neal plays a supporting role, will not be screened at the festival either. Directed by Rebekah Chaney, Slaughter was poised to be one of the highlights of the three-day fest.“We accepted the film because of the link with Wayne Jobson, a Jamaican musician and filmmaker who had some reggae on the soundtrack,” festival showrunner Barbara Blake-Hannah tells TALLAWAH. “But when the DVD arrived last Monday and the team viewed it, we realized we could not show it in our Reggae Film Festival, especially not in a Jamaica50 event.”Why? “The violence, the blood and gore, the sex, the immorality, all made it truly horrible and unsuitable for our event, especially for a Friday – Sabbath – night premiere, which is what the producers wanted. We have much better Jamaican movies in the festival this year, four new Jamaican features and several shorts. We would be doing them a big disservice if we showed this film and put it above our own, just because of the big-name posturing in what is really a big embarrassment.”As for O’Neal’s imminent absence from this year’s star-packed event, Blake-Hannah reveals that the actor’s demands were a tad extravagant. “[He] wanted two first-class tickets to Jamaica and a suite at the Pegasus, and he was not even the star of the movie,” she says. “In fact, I was a little ashamed to see how low such a big-name star has fallen, to be in such a movie.”In the meantime, the festival organizer fears the unfortunate turn of events may spell bad news for the RFF in other regards. “I will happily arrange a screening of the film for anyone who thinks we made a mistake,” she tells me. “Now that [O’Neal] is not coming, the [Jamaica Tourist Board] will probably not give the help I asked them to give the [festival], but I can't sacrifice my reputation and my standards. I have been asking for JTB support but have received no response from the agency yet.”