STANDING IN THE SPOTLIGHT: Keneea Linton-George marries passion with a mission to change lives 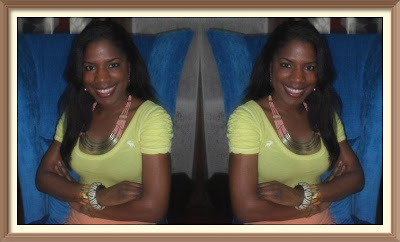 DOUBLE TAKE: “I take pride in what I do and I stick to quality.”
Over coffee on a warm Tuesday morning inside the urbane Spanish Court Hotel in New Kingston, Keneea Linton-George is recounting her fascinating journey to where she now sits – at age 30 – as a veritable mover-and-shaker in Caribbean fashion. “I more consider myself as a fashion entrepreneur than a fashion designer,” she tells me, resembling a spring bouquet in her canary yellow and soft pink ensemble. “I tend to branch off into other projects that have to do with fashion. And that’s how it’s always been.”
Indeed. These says, Linton-George’s exploits as a couturier have sort of taken a backseat to her hot new pursuits as the creator-hostess of one of TV’s most important shows, the hit fashion reality series Mission Catwalk, a programme that’s gradually doing its part to revolutionize the region’s fashion landscape. “Doing Mission Catwalk takes up a lot of time,” she admits, “but at the end of the day, I still do custom designs for friends and customers and brides and so on. But in terms of supplying to stores I haven’t done that in about two years.”
Welcome to Keneea Linton-George’s new chapter. It has become awfully clear that the primary mission today for this highly driven go-getter is to create unprecedented opportunities for emerging fashion designers – not just in Jamaica but across the region. And with the early success of Mission Catwalk it would appear that she’s in a position to do just that.
“About six or so years ago I decided that I wanted to do a fashion designer competition. And when I had the idea, America’s Next Top Model came out, and I said yes, I want to do something like that,” recalls the Bishop Gibson old girl, who originally hails from the “suburbs” of Mandeville. “And then I kind of modeled it off Top Model and Project Runway, which came out afterwards,” she explains, adding that it wasn’t difficult to get key people to buy into her vision.
“Well, Kay Osborne from TV J said it best before her retirement the other day that it was easy to buy into my idea because when they look at what I’ve done before in television with shows like College Lifestyle, and just the way I carry myself, they realized that if I decided to take on something like that it would work and be of a standard they would want to align with,” she explains. “So they kind of signed on to do it before I even had a pilot. So in that sense it was easy because my track record and all the ventures that I’ve done before were at a decent standard. Getting TV J on board was the easy part and once they were in, the real challenge was getting sponsorship. I take pride in what I do and I stick to quality.”
Since its spring 2011 debut, Mission Catwalk has quickly won guilty-pleasure status among its large and faithful viewership on the merit of its mix of freshness, youthful talent and the reality factor. Now in its second season with hour-long episodes, Linton-George says the show’s appeal has not diminished an ounce. If anything, the addition of designers from other Caribbean countries has given the product added interest. “Jamaicans want something entertaining to watch. They want something that has purpose. It’s a reality show that provides opportunities and growth for its industry. So on top of being entertaining, it’s substantial in what it offers.”

Anatomy of a Marriage
Despite the presence of Mission Catwalk’s diligent behind-the-scenes crew, the production largely rests on the pert shoulders of its conceptualizer and hostess. And given the work load, it’s amazing how Keneea has managed to pull it off with style. But, as TALLAWAH learns, that’s nothing compared to balancing married life and her duties as a wife – with plans to start a family any day now. Linton-George, who’s been married to Supreme Ventures’ boss Brian George for almost two years now, doesn’t shy away from disclosing her desire for a baby as she prepares to dive deep into her 30s. “Yeah, I want to have kids. I’m actually trying now,” she tells TALLAWAH with a mischievous smile. “Maybe I’m pregnant now, who knows. I’m trying and I’m having fun trying. So I plan to have a child really soon.”
Seeming a bit more at ease now with our conversation, Keneea is telling me about the joys and demands of being in a marriage. Asked to describe married life for a 30-year-old Jamaican woman like her, she candidly responds, "It’s fun but it’s a lot of work. Being married is wonderful. It does take away from me being as business-oriented as I’d like, but I treat marriage like a second career to give it the attention it deserves. My husband is a businessman, so he will share opinions and give me advice. He loves the show, which is why his company is a sponsor. And he thinks it’s doing good for the country. He has become a fashionista because of the show.”
The age difference (he’s 55, she’s 30), she admits, is no issue. Simply put, they are crazy about each other, and they make it work. “There is always compromise in marriage. And we have a lot in common. We tend to crack the same jokes and share the sense of humour, which is very important because I’m a very jovial person. We both come off as serious people, but we’re not (Laughing). You have to love being with each other, and enjoy each other’s company. We can spend the whole day together just reading and watching TV.”
Looking ahead to the next chapter for Mission Catwalk, Linton-George says she is determined to woo more sponsors to the show, in her quest to help provide up-and-coming fashion stars with opportunities they’ll need. “We have our main sponsors and we have a lot of people who are a part of [the show], but because of the economy we don’t have the type of funding that we need to really push it further,” Linton-George admits.

She continues: “Trinidad and those other countries are surprised at what we’ve been able to do with such a small budget – which is what Jamaicans are good at: we can make a lot out of nothing and we’ve shown that. But sometimes you get tired of making a lot out of nothing, and you want a lot to be able to do something better. So that’s what I’m aiming for – greater corporate support to do even better and maintain the quality standard.”
NEXT TIME: Linton-George on her “A.D.D” – and why she’s never read an entire novel.