STEPPING OUT: Preeing the big times, Casmar rises to the occasion 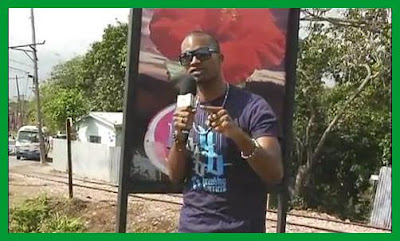 STREET STYLE: James hits the road for a taping of Pree Dis.
Casmar James is running late for our mid-afternoon interview at Devon House’s al fresco Mahogany Tree Bar. At minutes after two, he arrives at the table and jokes that he’d intended to scale the fence along Hope Road to hasten his arrival. At well over six feet, an action like jumping a fence seems like light work for James, whose lanky height and athletic frame have served him well in areas like runway modelling for such agencies as Saint International. But, as he explains, Casmar is really something of a daring thrill-seeker. “My life is all about spontaneity,” he admits matter-of-factly, casually dressed in all black and cool shades. “I’m young enough to still be cool, and mature enough to be doing grown folk’s stuff.” When he speaks, he sounds sincere and convincing.Although television audiences across the region have been getting to know Casmar as the appealing host of the FLOW TV entertainment series Pree Dis, he first impressed local people-watchers with his exotic features and unassuming demeanour when he was named Saint’s Male Face of the Caribbean, later signing with New York’s Fusion agency, at age 19. That was four years ago. And while Casmar hasn’t seen his fashion star rise to the level of a superstar like Oraine Barrett, he’s been quietly plotting his next moves. “I’m still with Saint. I was supposed to embark on some stuff this year, but that’s still in the working. I have to get my body Spartacus-ready,” he tells me with a laugh. “It’s getting there, so I’m proud of that. I think this is the best shape I’ve ever been in my life.”It’s a wait-and-see approach really for the 22-year-old Cornwall College old-boy, who holds a first degree in History and Archaeology from Mona. But in addition to a lust for spontaneity, he harbours a soft-spot for patience. “We will see what happens this year. You don’t know what tomorrow may bring,” he tells TALLAWAH. “The thing about the fashion world is that you have to have your heart in there 100 per cent. When I started out that was my goal, that was my dream: to be the next Tyson Beckford. But then school came into play, and then I was modelling, doing castings, doing [RE TV], and I was in a committed relationship. So I was trying to balance my time. And I’m a spontaneous person; I don’t like doing the same thing for too long. I get bored very, very easily.”

However, a desire to work in the media (“When I was younger I wanted to be on TV; I wanted to be a journalist like Michael Sharpe”) is a lifelong constant he’s held onto. At the invitation of producer Kevin Jackson, James has been hosting Pree Dis, for the past year, with faithful viewers accompanying him everywhere from parties and premieres to scenic islandwide destinations. As it happens, both James and Jackson are formerly of RE TV. “[I left] RE TV to work with Kevin on the show because I’m a loyalist,” Casmar confesses. “When I just started at RE TV he was the one that got me the gig. It was something that I always wanted to do, so I decided to just give it a shot.”Within the space of a year, James admits, the show has grown in diversity and appeal. And, perhaps more importantly, it’s aided in his own evolution from fledgling man-child to budding media star. “When I just started out I wasn’t completely comfortable with it. I’m a nervous mess (Laughs). But I’m at a level now in my life where I’m very comfortable on camera. I’m more comfortable being around people and stuff like that. So it’s been a journey with myself because I am my biggest enemy, where I’m the first to find out all the negative stuff about myself before I highlight the positives. So that was another goal for me, where I am now looking at all the positives and all that I have accomplished at my age. And I appreciate what’s going on.”In a sense, Casmar James and Pree Dis are mirrors of each other, but especially for the fact that both are at the stage of coming into their own in a super-competitive environment marked by lessons and growth. “I like where [Pree Dis] is at now. I want to see it grow and I just want to see it reach new levels. Now I get messages from places like St. Lucia from people who say they love the show, and it is very encouraging,” reveals James, whose family back home in MoBay fully endorses his ambitions. “My family is very supportive. My mother wants me to reach a level of comfort because it’s still a climb. I’m working my ass off just trying to be a better media personality. So with the growth and me getting comfortable on camera, I’m taking it to a point where I want to be the best at it.”Casmar on future plans: “I’m thinking about going back to school in September, if what I want to do this year doesn’t work out. I plan to pursue my Masters in Human and Social Behavioural Change. In the next five to seven years I’d love to own my own television station. I believe that if you have dedication and determination with the right people around you anything is possible.”On the single life: “I don’t have to report to anybody what I’m doing or where I’m going. Well, I wouldn’t say it’s a report, but you still have to give that person a certain level of respect. Being single, you have the opportunity to go out and just enjoy yourself. And I’m young so I should be having fun.”On Jamaica 50: “I’m excited. I love our history, so I hope they take it to a level where it’s something everyone can remember and talk about for the rest of their lives. I’m excited to see the growth of the country and the London Olympics, knowing that it’s going to further brighten the horizon for Jamaica and lift our spirits.”