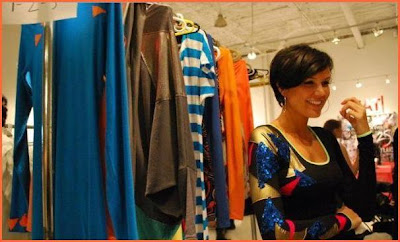 MODERN APPEAL: The designer gives us the 4-1-1 on her cool new gigs.
TALLAWAH has been inspired to follow Lubica Slovak’s fascinating life and career ever since she was romantically linked to one of our favourite people, Dr. Usain Bolt. It helps, too, that she is not only a talented couturier but also a total sweetheart rocking a great look. Though she remains faithfully mum on the blossoming Bolt/Slovak romance, Lubica is not one to hesitate when it comes to dishing on the passion projects that are trending in her universe. So far this year, the driven 28-year-old fashion star has at least two coming attractions to be thrilled about: a foray into the world of filmmaking and the debut of a fresh collection from her eponymous line. Asked about the upcoming short film, which she’s producing, Lubica tells me she can’t wait to share it with the world. “We shot it already; it’s amazing,” she says over the phone. “It was done recently and will be premiered at the end of May. But I’ll let you know for sure when we’ll have the viewing.” The five-minute clip, which was filmed at Strawberry Hill by none other than Nile and Storm Saulter, is titled Beyond and engages with, among other things, Miss Slovak’s abiding love for minimalist chic. “I can’t tell you what it’s all about because that would ruin the surprise,” she admits with a laugh. “I haven’t seen the finished product yet, but I’ve seen some shots, and they look amazing. I saw Storm yesterday, and he was saying that it is exactly what we wanted, so I’ll probably see the [final thing] this week.” And in case you’re wondering if Lubica is also starring in the picture, turns out that she’s gracefully left the on-screen performances up to three lovely models, two females and one male. In the meantime, the super-busy lady is just as excited about her brand-new collection which, she reveals, will be unveiled next month at the same time as the final cut of Beyond.