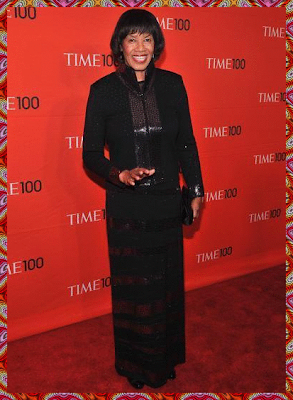 STYLE & SUBSTANCE: Simpson-Miller at the TIME event in NYC.
Taking her rightful place among the world’s most celebrated movers-and-shakers, Jamaica’s Prime Minister Portia Simpson-Miller, impeccably turned out in a rich black ensemble, put in an appearance on the red carpet at the 2012 TIME 100 reception gala hosted by the Jazz at Lincoln Centre in New York City on Tuesday night.

Calling her the “embodiment of perseverance and strength,” the editors of TIME named Simpson-Miller among this year’s crop of honorees, dubbed the 100 most influential people on the face of the Earth.

At the swanky event, Simpson-Miller hob-nobbed with such luminaries as US Secretary of State, Hillary Clinton, NBA phenom Jeremy Lin, comedy queenpin Kristen Wiig, and FLOTUS Michelle Obama, among others. Fellow Caribbean honoree Rihanna was the evening’s musical act, performing her chart-topping hit “We Found Love” before moving into a rendition of Bob Marley’s “Redemption Song.”

Posted by TALLAWAH Magazine (tallawahmagazine@gmail.com) at 12:59 am