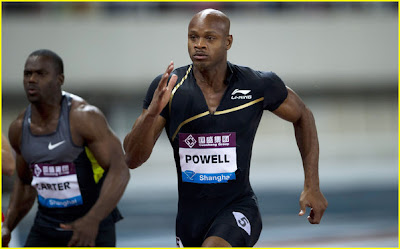 BORN TO RUN: Powell competes in Shanghai. Carter, at left.
Injury-plagued sprinter Asafa Powell powered his way to victory in the Men’s 100M at the Samsung Diamond League meet in Shanghai, China, on Saturday. With his shocking loss to the American Justin Gatlin a week earlier still fresh on everybody’s minds, the performance was a decent, face-saving act from the former world-record holder, who stopped the clock at 10.02 secs.Clearly pleased with himself, the cameras captured Asafa smiling widely a minute after crossing the finish line ahead of the field, which included compatriot Nesta Carter. But is this much-needed confidence booster enough to sustain Powell all the way to London this summer? “I know for sure if I go out there and I do what I’m supposed to do, it will be very hard for anyone to catch me to the finish line because there’s no doubt that I’m the best starter out there,” the 29-year-old notes in a recent interview with Eurosport. “Many track and field people know that if I stay relaxed and run my race like I’m supposed to I will be the winner at the Olympic Games. That is what I’m trying to do, and I know what to do.”Take that, Oral Tracey!In any case, Powell’s devoted loyalists continue to root for him and celebrate this most recent moment of triumph. But, judging by his track record of inconsistency on the big stage, it remains to be seen if he’ll deliver when it matters most this season.

Posted by TALLAWAH Magazine (tallawahmagazine@gmail.com) at 9:44 am