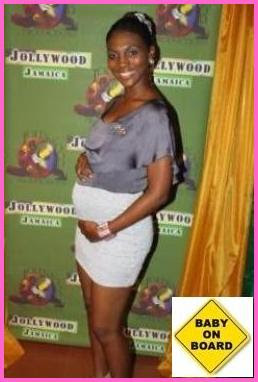 MAMMA MIA: The acclaimed actress has a special delivery.
Over the course of her acting career, Sakina Deer has tackled parts that fall everywhere from intensely domestic to delightfully musical with wide-eyed fervour and no shortage of relish. These days, the stage star is bringing that same cheerful energy and endless optimism to her new real-life role of (expectant) parent. “It’s a girl, we hope, but that’s what we saw on the ultrasound,” reveals the mom-to-be, calling from home by telephone and positively bursting with glee.So what’s the last few weeks been like for this first-time mommy? “To be quite honest, for the last couple of months I was actually kinda feeling like myself. But at the beginning of the last trimester I just got really tired,” Sakina tells TALLAWAH. “And I think that I am at a point now, the last eight weeks, where I just want them to come and let me finally know who is in there, bubbling up in the middle of the night and won’t let me sleep,” the actress adds with a little laugh.By her own admission, however, Sakina knows she is very fortunate. “I am appreciative of my blessings,” she tells me. “She’s been a good baby so far, so I’m hoping that when she comes out everything will be fine.”As any devoted artist will tell you, the reality of having to break, albeit temporarily, from a career you cherish for whatever (personal) reason can be a difficult pill to digest. As it turns out, Sakina is no exception. “Normally, I’d be doing Basil [Dawkins]’s show, [Where Is My Father?], but I found out [that I was pregnant] after I literally started rehearsals, and for safety’s sake no producer or director would be comfortable with a pregnant person on the stage,” Sakina explains. “I miss it so much that I’ve made it my point of duty to see every play that exists as long as I’m up for it. I definitely miss it. I definitely feel like I’m going half-nuts (Laughs).”She continues: “The only thing that’s keeping me sane is that I will have a wonderful gift at the end of it and be able to return to acting next season. So I definitely miss the stage; the one season really felt like a long time.”Reflecting on her Thespy-nominated turn in last year’s period musical Last Call, Deer has nothing but glowing praise for the writer-director. “First of all, it was great to be doing musical theatre again, because that is initially where I started,” she says. “So it was really good to be back singing and acting, and I think having a director like Keiran [King] was very different. Each director has their own sense of style and what they want to pull from the actors, and having a director like him was great because he’s very intricate; he works on detail. And I think because of that it came off being a detailed performance and a detailed show. I loved it. (Laughs).”