BIRD OF BELIZE: Can Rebecca Stirm go all the way on Mission Catwalk? 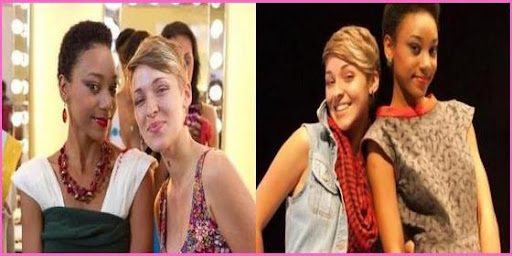 TWO OF A KIND: Stirm (right) with her model-muse Gonzalez.
“I’ve been doing fashion for four years now, so I’m glad to be here in Jamaica for this competition. And I’m here to win,” 18-year-old Belizean Rebecca Stirm told me when I chit-chatted with her at the Mission Catwalk launch party for Season 2 back in January at the Courtleigh Auditorium in New Kingston.If her exploits to date on the fashion reality series are anything to go by, the girl means business.After almost seven weeks, Stirm is the queen of the roost, proudly holding the record for the most challenge wins – three. Most recently (last Tuesday night), she wowed the judges and home audiences with her uber-stylish HIV/AIDS tribute piece (a jacquard mini-dress with a delightful twist) that impressively did its job of dropping jaws and turning heads.Unsurprisingly, now the million-dollar query on the tip of everyone’s tongue happens to be: Is Stirm a lock for the crown this season?True, she has lavishly talented rivals in the likes of previous challenge winners Gregory Williams and Crystal Powell, but Stirm, who is yet to break into her 20s, is possessed of a style wizardry and an impeccable sense of the subtly sensational that makes her designs – not to mention her fabulously thin model Abenah Gonzalez – soar on the catwalk.One thing is clear: Stirm, whose future looks astonishingly bright, has her sharp designer eyes squarely fixed on the coveted top prize.

Email ThisBlogThis!Share to TwitterShare to FacebookShare to Pinterest
Labels: Fashion Buzz, Mission Catwalk, Ones To Watch, The Style File