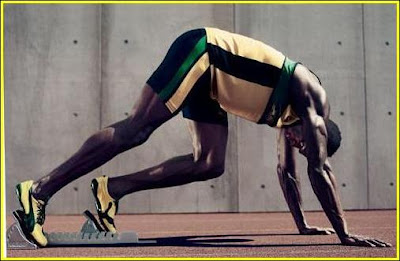 HOME STRETCH: Bolt has great plans for London 2012.
“I want to be a legend,” Usain Bolt tells Men’s Health magazine for an insightful piece on top athletes heading to this summer’s Olympic Games. “I must surpass my accomplishments at the Beijing Olympics. I want to win four gold medals in London, I want to set four world records, and I want them to come in a range of events that have never been attempted by any sprinter.” Ever looking to push the boundaries of athleticism, Bolt confesses that in addition to repeating the events he won in Beijing in 2008 (the 100 M, the 200 M, and the 4×100 relay), he wants to take gold in the 4× 400 relay. “Saying I wanted to be great, putting it in the minds of my countrymen as well as in my own mind, forced me to work to attain it,” Bolt says. “My career did not always go smoothly. Especially at first; I had many injuries. I might have settled for much less if I hadn't had that big goal.”As for the rigorous preparations, the World’s Fastest Man fesses up that they’re putting his principled work ethic to the ultimate test. “Training for the 400 is very difficult,” Bolt admits. “It hurts a great deal more than training for the 100 and 200. Thinking about suffering during a workout, thinking that you might be throwing up when you do those 600-meter repeats, you wonder if it's worth it. But I have that goal, I want to be a legend, so I run those 600s. Even if it means throwing up,” he adds with a laugh.>> READ MORE, including Bolt’s tips for building core strength, at Men's Health.