COUNTDOWN TO CALABASH: All on track for Jubilation! 50 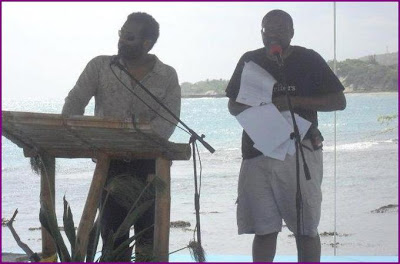 DOUBLE TROUBLE: Colin and Kwame "ring the alarm" at Calabash 2010.
With only a week to go before Calabash 2012 lights up the south coast, chief festival organizer Justine Henzell has given the reassurance that this year’s incarnation of the beloved lit fest is set to go down in our cultural history as one of the finest yet. “I think that this year will be one of celebration and that the joy that we feel about Jamaica 50 will be very tangible in the air at Jubilation! 50,” Henzell tells TALLAWAH. “Next week this time the majority of our authors will have landed in Jamaica, and we are very excited about the cast.”According to Henzell, the Treasure Beach community is equally excited as everyone – from hotel proprietors to craft vendors – is preparing to welcome the many overseas guests and visitors from around the island. “There are very few rooms left in Treasure Beach, however there are many shuttle options for people who want to travel down,” Henzell advises, adding that international media houses are also itching to witness this year’s festivities. “Overseas media has been so incredibly responsive that we have press coming the US, the UK, Canada, Africa and the Middle East.”Set for the weekend of May 25-27, Calabash 2012 will bring together a characteristically stellar mix of novelists, poets and spoken word artists from across the globe. And Henzell is confident that patrons are in for a truly fulfilling experience. “I think that, as always, the programming is inspirational and diverse. We have writers not only from the US and the UK, but we have writers from Nigeria, Ethiopia, South Africa. We have not only poets and authors but the thing is that the styles of poetry and the styles of writing are very different.”For Henzell, Anis Mojgani (“one of the most exciting spoken word artists around, with a huge following”) and Harvard’s Orlando Patterson (The Children of Sisyphus) are particularly thrilling names among this year’s batch of presenters.Finally, I had to ask: Will the elusive Colin Channer put in an appearance? “We’re hoping he’s going to be able to join us. But he has some other commitments, so we are not sure that he will,” Henzell confesses. “But Kwame is definitely coming and he’s bringing his entire family. He usually has the one child with him, but this year the entire Dawes family is coming, and it’s very exciting.”