DEREK WALCOTT in Kingston: ‘Writing has not changed my life’ 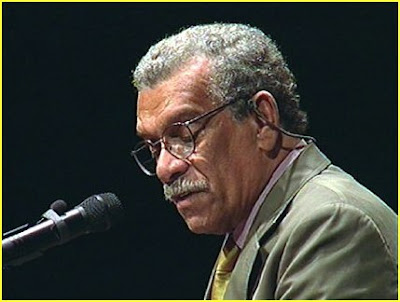 MAIN ATTRACTION: "The Nobel Prize brings a lot of responsibility."
Literary giant Derek Walcott is the first to admit that he’s been inordinately fortunate in his line of work – but has his vocation changed his life by his standards?Following his reading on Monday at New Kingston’s Knutsford Court Hotel (organized by Artistic Expressions Ltd), TALLAWAH got the Nobel laureate to illuminate his own feelings about his journey as a writer of international repute:“I started writing very early to change my life. But it has not changed my life since I’ve been doing the same thing I did when I began very, very young. So the answer would be, writing has not changed my life; it has continued it. I wrote from very early. Remarkably early. And I tried to write as well as I could. I knew from the time I was a child that that was what I wanted to be; I wanted to be a poet, and given that my mother was a teacher and my father was a writer and a painter. So I knew my vocation, and I’ve always considered myself lucky because I knew exactly what I wanted to do from age six or seven.So it hasn’t changed my life, but I’ve been lucky enough to having done some fine things in my experience. The Nobel Prize brings a lot of responsibility. Your life becomes very active. There is so much time demanded of you, and it’s almost like a torment. It’s like saying ‘I won?! Wow. And then saying ‘Oh, Jesus. I won.’ I’ve never said that. (Audience laughs). But it can be very exhausting. In that way, I guess it does change your life because it makes you be at the call of people who want you to read at events like these, and so on.But [writing] hasn’t changed my life because nothing changed. This is what I’ve wanted to do forever. So, if anything, it improved it.”>> WORDS TO LIVE BY: Local literati step out for Walcott