GALE FORCE: Carrie Underwood mixes it up with Blown Away 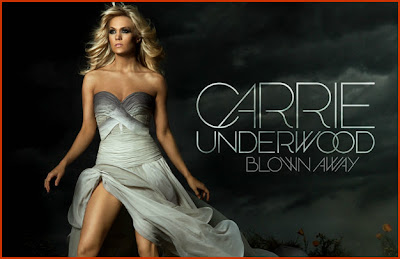 CARRIED AWAY: Underwood melds danger and desire on her latest.
Ever since she took a baseball bat to an unfaithful lover’s “pretty little souped-up four-wheel drive” on her massive hit “Before He Cheats” (off 2005’s multiplatinum debut Some Hearts), Carrie Underwood has been gradually amassing street cred as a good-girl-with-a-quiet-baddie-streak – and fans have been waiting for her to give full rein to that inner vixen.The wait is over. This month sees the arrival of the pop-country dazzler’s fourth studio album, Blown Away (Sony Nashville), which is marked by a decidedly edgy, wild-at-heart aesthetic that sheds new light on the big-voiced chanteuse’s career arc.Brash lead-off single “Good Girl” takes aim at those latter-day sweet things Carrie feels need to display a bit more grit when it comes to love and romance. Bold tracks like the uptempo “Cupid’s Got a Shotgun” continues this subversive dalliance with matters of the heart, a theme which takes on poignant, if devious, resonance on “Two Black Cadillacs,” an emotional number about a wife and a mistress who both show up for the funeral of the man they once shared.That Underwood manages to perform such cuts with no shortage of spark and sincerity helps explain why the former American Idol champ is such a consistently noteworthy megatalent in the industry mainstream – and why fans show no sign of losing interest in her artistry anytime soon.Elsewhere on this winsome 14-track record (which features production from Mark Bright and songwriting contribution Hilary Lindsey and Ryan Tedder), Blown Away is classic Carrie, conveying the sort of affecting storytelling, powerhouse vocals, and sheer star power that made her an instant A-lister and a consummate fave among the ever-growing multitude of modern country darlings. Easy standouts like “Do You Think About Me?” and “Good in Goodbye” and Thank God for Hometowns” would fit right in on 2007’s Carnival Ride or even 2009’s Play On – and are the very definition of real and heartfelt.So while Blown Away indicates a step into darker territory for Underwood, the singer’s thoroughly classy and refreshingly charmed delivery is the stuff of a true American sweetheart. Tyrone’s Verdict: B+BEST TRACKS: “Forever Changed,” “Good Girl” and “Do You Think About Me”