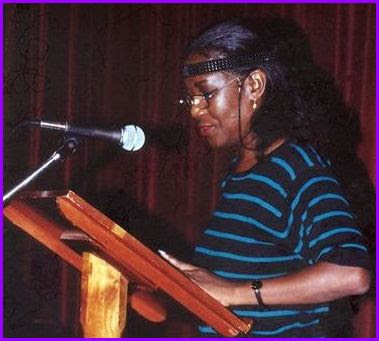 VICTORY VERSE: Gauntlett reads from one of her collections.
Who said the Summer Olympics was all about super speed and rigorous competition? As it turns out, the upcoming 2012 Games, set for London, have inspired a literary tangent. The Scottish Poetry Library, in conjunction with the BBC, have devised The Written World, a special project through which they plan to broadcast a poem for each of the 204 competing nations to be read on BBC Radio and other public places. Jamaica’s very own award-winning scribe Delores Gauntlett (Freeing Her Hands To Clap, The Watertank Revisited) is among the acclaimed writers from across the globe whose work will be featured.“The poem selected was chosen from one of the poems I had published in an anthology called New Caribbean Poetry, published by Carcanet Press and edited by Kei Miller,” a delighted Gauntlett tells TALLAWAH via email. “On the BBC website, the poems are lined up for the next couple of weeks and are already listed by date/poet/poem-title, but Jamaica is not yet scheduled. I'm told by the organizers that they might not schedule Jamaica until during the Games.”Considering that this will be over 200 nations, the BBC programme will run from now through September and will air one poem per day through that period. And according to the Edinburgh-based spearheading team, the project is not for the profit of any of the participating organizations. “The Written World is being funded by Creative Scotland in collaboration with the BBC. It is educational in the widest sense and its online resources will ensure that we leave a legacy of truly global scope,” the group offers in a statement. “This vast and ambitious project is an opportunity to bring poetry from many nations into the lives of people who might not ordinarily be interested in it, giving them a reason to enjoy and explore a great art form.”VISIT bbc.co.uk/radioscotland/programmes/formats/readings.