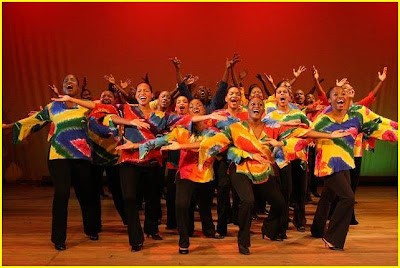 BIG FINISH: The University Singers in performance at Mona.
The University Singers continue to remind us to expect the unexpected. As the acclaimed Mona-based choir looks to opens its 2012 concert season next Thursday, they are throwing something new and delightfully exciting into the mix: a Jamaica 50-inspired mini opera.According to president Deborah Thomas, the occasion of Jamaica’s 50th anniversary of Independence has inspired the Singers to put on a show with a twist. The mini opera, she explains, charts Jamaica’s journey from 1865 (the year of the Morant Bay Rebellion) onward. “It’s an exciting addition to our programme this year,” she tells TALLAWAH over the phone. “The opera isn’t the entire thing though, it’s just an addition to the concert – which will have a first half and a second half with the opera insert.”That said, devoted concertgoers (and new patrons) will enjoy a musical mélange of sacreds, spirituals and tunes with a pop sensibility, in addition to songs from the new opera titled Jamaica 50: The Golden Jubilee. “It’s the first of its kind. It’s the first time an opera like this is being done in Jamaica,” notes Thomas, further emphasizing that the 2012 season is exclusively a Jamaican affair. “We are featuring only Jamaican music and Jamaican composers this year. The show is solely Jamaican; everything about it is Jamaican.”As for this year’s crop of performers, it’s a signature combination of veteran choristers and musicians (like Carolyn Reid-Cameron and Djenne Greaves) and new kids on the block. “We do have our singers who’ve been with us for over 30 years and then we have quite a number of new students as well,” Thomas observes. “So it’s a mix of old members as well as very new members. The audience can definitely look forward to some new faces.”The 2012 concert season of the Univ. Singers is slated for May 24 to June 24 at the Philip Sherlock Centre, UWI Mona.