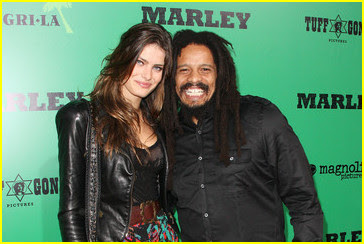 AFRICA BOUND: Rohan and Isabel to get hitched in Ethiopia.
Like his legendary dad, Rohan Marley isn't keen on the idea of waiting in vain. A Brazilian magazine reports that Marley and his new girlfriend, the Sao Paulo-based model Isabeli Fontana, are making plans to wed in Ethiopia before the year is out. But Isabeli’s mother is voicing concern over what she feels are the couple’s hasty plans to tie the knot. “I think everything is happening too fast,” Maribel Fontana tells Veja magazine, “but everything has a different rhythm with Isabeli.” According to the report, it’s a superlong-distance romance. The 28-year-old model and Marley rarely see other, as she continues to live in Sao Paulo and he lives in New York. Even so, Rohan, who runs the Marley Coffee Company seems to determined to wed his new lady love in the Motherland. “Rohan told me we have to return to the roots so the marriage will last forever,” says Isabeli.Isabeli, a mother of two, is looking at marriage number three, while Marley, the ex of Grammy winner Lauryn Hill (with whom he has five kids) was previously married to Geraldine Khawly. Last month, the couple was photographed on the red carpet at the Los Angeles premiere of the Marley documentary.