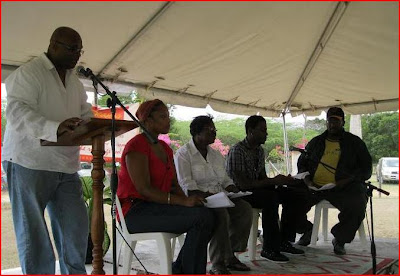 THE READERS: Cooke and a quartet do an excerpt from his latest play.
Aston Cooke fans who’ve been eagerly awaiting the debut of his newest play, Jonkanoo Jamboree, will have to hold on a bit longer. Jamboree, which was slated to premiere this month at UWI’s Philip Sherlock Centre (in the hands of the University Players), has been pushed back to October, TALLAWAH has been informed. Ahead of that staging though, Cooke’s highly anticipated comedic revue Jamaica 50 2 Rahtid will take centrestage (with a cast that includes Deon Silvera and Dahlia Harris) at the Pantry Playhouse in August.In the meantime, take a look at Cooke’s witty and wonderful Jamaica 50-inspired short film, Take Me to the Ball (below), which snagged first-place honours (and the People’s Choice Award) in the recent Make-A-Film-in-24-Hours competition at the 2012 Reggae Film Festival.