NOTES ON A SCANDAL: MILK comes clean about sex tape, fighting for her career, and being inspired by Fae Ellington 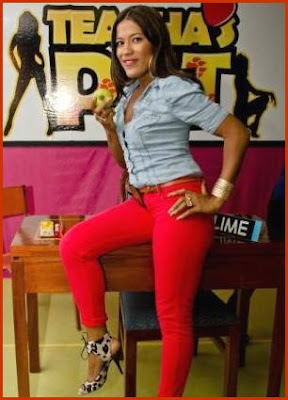 LESSON LEARNED: The it girl on overcoming a dark chapter.
It’s been four years since that infamously shocking sex tape nearly ruined her life, yet for Amelia ‘Milk’ Sewell it’s still a daily struggle to move forward as a woman working to support herself and her teenaged son. “The way that Jamaica looks at [these things] is very double standard because four years later it’s still affecting me,” she confesses in a sit-down exclusive for the Lauren O Lauren talk show, which aired last Tuesday night on FLOW TV. “It affects my income and my earning. It affects the way I take care of my son. I have to be finding different things to just get by and make it.” Her anger over how then-employer CVM TV handled the matter is still palpable. “When it happened, I was at CVM for six years and I really, really hoped that they’d stand by me, but they didn’t work with me and I was very, very disappointed with how they reacted. They wanted me to stay out of the public eye when it happened, like I mustn’t go to the supermarket, I mustn’t go to the library, I mustn’t go in public places,” she explains. “But I didn’t feel like I needed to hide away from the public because I didn’t do anything wrong. I was on a tape with somebody I was with for like five years. He could be considered my common-law in the Jamaica courts.”Milk, whose most recent TV stints include hosting Teacha’s Pet and judging Tastee Talent Trail, also touched on losing friends in the aftermath – and how ace selector Tony Matterhorn helped to restore her self-confidence. “I big up Tony Matterhorn every time I tell this story because he made it okay for me to come into the dance, and nobody don’t say anything to me,” she reveals. “Because he would get on the mic and say ‘Big up, Queen Milk. She ah the new millennium. Mi love the girl dem weh don’t do it, but you see the girl dem weh do it, mi love them more.’”Admittedly single, Milk stresses, too, that it wasn’t the release of the tape and ensuing scandal that lead to the end of her then-relationship. And as for the identity of the gentleman featured on the tape with her: “Everyone knows that I was with one person for the entire time. I’m not the type of girl who is a leggobeest because I’m a celebrity,” she responds. “I was with [ZJ] Liquid for five years, and we went together and we started working at ZIP [FM] at the same time. So there could never be a rumour that it was this person or that person because I can count on one hand the number of people I’ve been with in Jamaica.”In the meantime, the petite dynamo emphasizes that in her determination to finally put the whole saga behind her, she sees Fae Ellington as a role model and a source of inspiration. “The strongest woman that I know is Fae Ellington, who went through what she went through and is still around,” Milk observes. “So I draw from Fae Ellington’s experience, what happened to her a long time ago, and I just depend on that and whatever else to keep me together.”

Email ThisBlogThis!Share to TwitterShare to FacebookShare to Pinterest
Labels: Do I Smell a Controversy?, Fame and Scandal, Jamaican Media, Ones To Watch, TV Buzz, Updates