ON THE RADAR: What’s in store for Rising Stars this season? 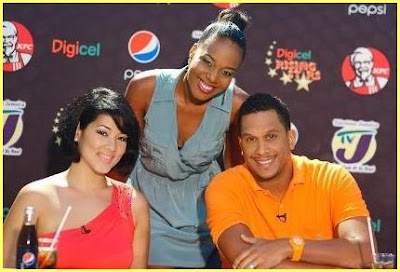 FAMILIAR FACES: Tessanne (left), Terri-Karelle, and Bambino.
Is Digicel Rising Stars getting a new host? That’s precisely what many have been asking since it was reported that presenter Terri-Karelle Reid-Griffiths had relocated to the States (to have her baby, etc..). But, according to Sharon Schroeter, long-serving producer of the top-rated televised talent series, Terri-Karelle should be back under the lights when the brand-new (ninth!) season kicks off this summer.“We haven’t made any plans to change the host this year, so Terri-Karelle should be back on board,” explains Schroeter, calling via telephone. “But we are not releasing any information about the show until we have our launch on June 8.”By all accounts, Tessanne Chin and Bambino (with a specially-invited weekly guest) should be back dishing out more tough love from the judging table, as well, this summer.